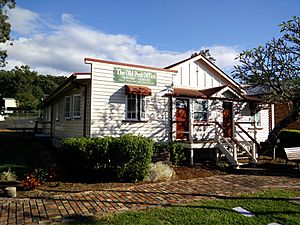 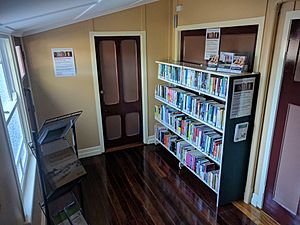 The Mudgeeraba Old Post Office is a former post office at 57 Railway Street, Mudgeeraba in the City of Gold Coast, Queensland, Australia. It is listed on the Gold Coast Local Heritage Register.

The building was erected in 1927 as the council chambers for the Shire of Nerang and was used for that purpose until 1949, when the Shire was amalgamated into the Shire of Albert.

The building currently contains a number of facilities managed by the Gold Coast City Council:

All content from Kiddle encyclopedia articles (including the article images and facts) can be freely used under Attribution-ShareAlike license, unless stated otherwise. Cite this article:
Mudgeeraba Old Post Office Facts for Kids. Kiddle Encyclopedia.