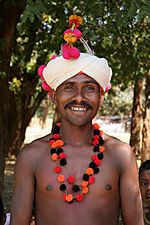 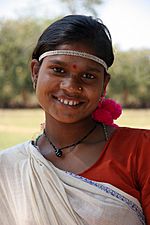 A Muria man and woman

The Muria are an aboriginal tribe in Chhattisgarh, India. They are a tribe of the Gondi people. The Muria live in the Bastar district of Chhattisgarh. They traditionally live by agriculture, hunting and fishing, working as a community. They are surrounded by Hindu culture, but they are animists. They have an omnivorous diet, and liquor plays a big role in their society. According to sociologists, the Muria tribe is a very harmonious society.

All content from Kiddle encyclopedia articles (including the article images and facts) can be freely used under Attribution-ShareAlike license, unless stated otherwise. Cite this article:
Muria people Facts for Kids. Kiddle Encyclopedia.