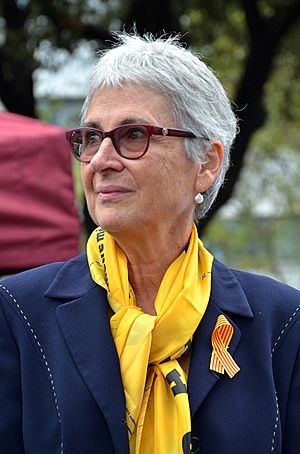 Muriel Casals i Couturier (April 6, 1945 – February 14, 2016) was a French-born Spanish economist. She was an emeritus professor in the Department of Economics and Historical Economics in the Autonomous University of Barcelona (UAB). She was also vicedean of International Relations and Cooperation between 2002 and 2005.

She specialized in industrial reconversions, the history of economic thought and European economics. Casals was also the representative of the UAB in the Xarxa Vives d'Universitats (Live University Networks) between 2002 and 2009. She had been a visiting professor at the University of Edinburgh, the London School of Economics and the University of Wales at Bangor. She was born in Avignon, France to Spanish parents.

Couturier died on February 14, 2016 in Barcelona. She had been injured after being hit by a bicycle. She was aged 70.

All content from Kiddle encyclopedia articles (including the article images and facts) can be freely used under Attribution-ShareAlike license, unless stated otherwise. Cite this article:
Muriel Casals i Couturier Facts for Kids. Kiddle Encyclopedia.