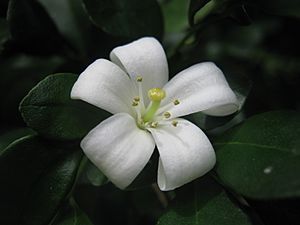 Murraya paniculata, commonly known as orange jasmine, orange jessamine, china box or mock orange, is a species of shrub or small tree in the family Rutaceae and is native to South Asia, Southeast Asia and Australia. It has smooth bark, pinnate leaves with up to seven egg-shaped to elliptical leaflets, fragrant white or cream-coloured flowers and oval, orange-red berries containing hairy seeds.

Orange jasmine was first formally described in 1767 by Carl Linnaeus who gave it the name Chalcas paniculata in Mantissa Plantarum. In 1820, William Jack changed the name to Murraya paniculata in his book Descriptions of Malayan Plants [Malayan Miscellanies].

Murraya paniculata grows in rainforest, often as an understorey shrub in vine thickets, including behind beaches. It is native to South and Southeast Asia, China and Australasia, the distribution area extends from Pakistan via India, Sri Lanka and southern China to Taiwan, the Philippines, the Ryūkyū Islands and the Mariana Islands, to the south via Malaysia and Indonesia to New Guinea and parts of Australia. In Australia it is native to the Kimberley region of Western Australia and the northern parts of the Northern Territory and parts of Queensland. The species has been naturalised in other places, sometimes becoming an invasive weed, including on many Pacific islands. In Queensland it is regarded as different from the cultivated form Murraya paniculata 'Exotica' which is regarded as one of the top most invasive plant species in south-east Queensland.

Murraya paniculata is cultivated as an ornamental tree or hedge because of its hardiness, wide range of soil tolerance (M. paniculata may grow in alkaline, clayey, sandy, acidic and loamy soils), and is suitable for larger hedges. The plant flowers throughout the year and produces small, fragrant flower clusters which attract bees, while the fruits attract small frugivorous birds.

It is the preferred host to the insect pest Diaphorina citri, the citrus psyllid. This psyllid is the vector for the citrus greening disease.

All content from Kiddle encyclopedia articles (including the article images and facts) can be freely used under Attribution-ShareAlike license, unless stated otherwise. Cite this article:
Murraya paniculata Facts for Kids. Kiddle Encyclopedia.