The Museum of Tropical Queensland (abbreviated MTQ) is a museum of natural history, archaeology and history located in Townsville, Queensland, Australia. It is located in the same complex as the Reef HQ Aquarium. MTQ is a member of the Queensland Museum Campus Network. 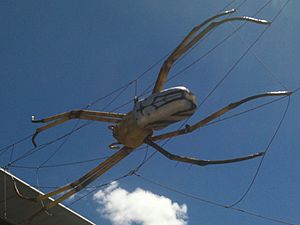 Spiderella - The giant spider on the front of the museum

The museum opened in 1987 as the "North Queensland Branch" of the Queensland Museum, under the direction of Curator-in-Charge Dr. Carden Wallace.

In 1997, Carden Wallace was named director of the museum. Its current building was constructed at a cost of 18 million Australian dollars, and was opened on 3 June 2000 by the then Queensland Premier Peter Beattie.

Scientists in the museum have gained international recognition in various fields, particularly those with marine themes.

The museum houses artefacts recovered from the wreck of HMS Pandora, one of the most significant wrecks in Australian waters. The Pandora sank off the coast of north Queensland in 1791 after capturing some of the participants in the infamous mutiny on the Bounty.

The Maritime Archaeology Section administers the Historic Shipwrecks Act 1976, which covers sites including HMS Pandora and SS Yongala wrecks. Access to these sites is through permit only.

In 2006, worldwide attention was received for the discovery of the Australian snubfin dolphin, the first species of dolphin to be discovered in 56 years.

The museum also houses what has been described as "the scientifically most important coral collection in the world".

All content from Kiddle encyclopedia articles (including the article images and facts) can be freely used under Attribution-ShareAlike license, unless stated otherwise. Cite this article:
Museum of Tropical Queensland Facts for Kids. Kiddle Encyclopedia.