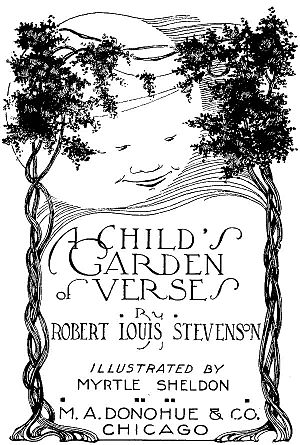 Myrtle Sheldon (c. 1893 – ?) was an American illustrator of children’s books.

Sheldon was African-American, and, according to biographic information at the Library of Congress, she was born about 1893. She illustrated many children's books, some without attribution at the time of publication. Those publicly credited include A Child's Garden of Verses by Robert Louis Stevenson, Ellen Tarry's Janie Belle, and the 1932 Newbery Honor-winning children's book Boy of the South Seas by Eunice Tietjens. Tarry’s work was particularly notable, as Janie Belle was one of the first children’s picture books with an African-American author published in the United States.

Actress Kathy Bates listed the Stevenson book as one of her favorites and lauded Sheldon's drawings.

Works illustrated by Sheldon include:

All content from Kiddle encyclopedia articles (including the article images and facts) can be freely used under Attribution-ShareAlike license, unless stated otherwise. Cite this article:
Myrtle Sheldon Facts for Kids. Kiddle Encyclopedia.