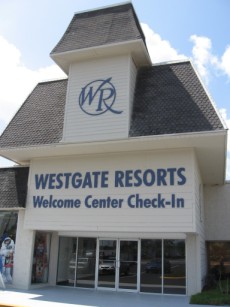 Mystery Fun House was an attraction in Orlando, Florida, US. It was founded with the help of David A. Siegel on March 28, 1976 and operated through February 18, 2001. It was located near International Drive, on Major Boulevard just across from Universal Orlando Resort. Over time, the fun house expanded to include a laser-tag facility, an arcade, a dinosaur-themed mini golf course and other attractions.

The former lobby of the Fun House was a Westgate Resorts check-in center. The Building now sits abandoned due to Hurricane Irma and it's currently on sale.

The Fun House consisted of 15 areas called "chambers", including a mirror maze, a rolling barrel, crawl-through tunnels, scary jail areas, a moving bridge and a crooked room. In the early days, there was a multiplex movie theater, a hologram machine, a Disco room with a lighted dance floor, and a wall-sized "computer" that could read patrons' handwriting and provide fortunes. There was also a show about three quarters of the way through the Fun House with music, lights, special effects and a video of the Wizard projected on a large screen.

Starbase Omega was a laser tag facility. Each player was equipped with a reflective target badge, a battery belt pack, and a "laser" gun. To get to Starbase Omega, patrons sat on a transporter that simulated a ride to the planet. Once on the planet—a large, dark room with extra-bouncy carpets and a hovering spaceship—players shot light beams at other players, trying to hit their reflective badges.

Originally called Mystery Mini Golf, Jurassic Putt was an 18-hole, dinosaur-themed miniature golf course that included a dark building for one of the holes.

In MFH's later days, a pizza parlor was added that featured an animatronic show in the style of ShowBiz Pizza and Chuck E. Cheese's.

Two movies were filmed at the Mystery Fun House: the birthday scene of Parenthood (1989), and most of Night Terror (2002).

It's been rumored that the original Mystery Fun House will be gutted and rebuilt using new technology. As of February 2013 no permits have been filed with Orange County. As of March 2, 2013 the front part of building has been repainted in its original color. In May 2015 Westgate Resorts posted job openings looking for carpenters and vehicle graphics installers for the Mystery Fun House, leading many to believe the rebuilding of the MFH will be started soon. 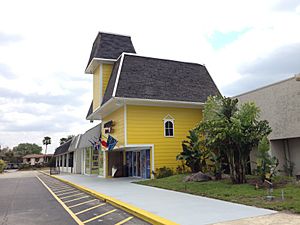 All content from Kiddle encyclopedia articles (including the article images and facts) can be freely used under Attribution-ShareAlike license, unless stated otherwise. Cite this article:
Mystery Fun House Facts for Kids. Kiddle Encyclopedia.