Mystic Timbers is a wooden roller coaster located at Kings Island in Mason, Ohio. Constructed by Great Coasters International and designed by Skyline Design, the roller coaster opened in the park's Rivertown section on April 15, 2017. Mystic Timbers is the park's fourth wooden coaster, and its opening allowed Kings Island to reclaim the title of having the most wooden roller coaster track of any amusement park in the world with 18,804 feet (5,731 m). During its marketing campaign, the ride's finale element in an enclosed shed was kept secret until the ride's debut. In the annual Golden Ticket Awards by Amusement Today, it was awarded "Best New Ride" in 2017.

Kings Island officials began dropping hints during the 2016 operating season, which teased the possibility of a new, future attraction. In the park's Rivertown section, a construction wall was built displaying signs that stated, "Caution - Watch For Falling Trees". In June 2016, a set of plans labeled "Kings Island Project 2017" was submitted to the Mason planning board with designs for a new roller coaster. Until then, early speculation from enthusiasts believed that another possibility was a larger log flume to complement the nearby Race For Your Life Charlie Brown attraction. Later that month, media outlets in the area received a toy axe with an attached note hinting about activity in Rivertown. The following month, another clue surfaced, consisting of a blue toy pickup truck with a bundle of logs in the back. It contained a note stating that an official announcement would occur in the park on the evening of July 28, 2016.

On the night of the announcement, more than 1,000 park guests lined up two hours in advance to attend the evening event inside the park. It was revealed that the new attraction would be a roller coaster named Mystic Timbers. The new ride would mark the park's sixteenth roller coaster and fourth wooden roller coaster overall. Upon completion, Kings Island would reclaim the title of having the longest collection of wooden roller coaster track in the world at 18,804 feet (5,731 m), when combined with the other three wooden coasters in the park – The Beast, both tracks on The Racer, and Woodstock Express. 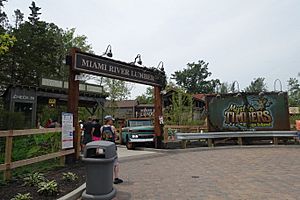 The entrance to Mystic Timbers

The ride's logo was unveiled as well, along with a simulated POV video of the ride. However, the simulation stopped short of revealing what happens when the train enters an enclosed shed near the end of the ride. Park officials indicated that the finale's details would not be revealed until opening day. The level of anticipation surrounding its debut put Mystic Timbers on USA Today's top nine list for most anticipated roller coasters of 2017.

Vertical construction of Mystic Timbers began in August 2016. On March 20, 2017, the ride performed its first test runs. The attraction opened for the press on April 13, 2017, allowing roller coaster enthusiasts and members of the media to ride early.

Mystic Timbers is themed around a fictional logging company, Miami River Lumber, that purchased the surrounding land for its timber. The company planned to use the adjacent Kings Island & Miami Valley Railroad – the park's steam locomotive attraction – for shipping the timber out. However, an unexplained series of events led to the shutdown of the company, as the land was taken over by rampant natural growth.

The attraction was designed and built by Great Coasters International, a Pennsylvania-based company that specializes in the construction and restoration of wooden roller coasters. The 109-foot-tall (33 m) Mystic Timbers is 3,265 feet (995 m) in length and reaches a maximum speed of 53 miles per hour (85 km/h). It features a 98-foot-long (30 m) drop and sixteen airtime hills. Its three trains each carry 24 passengers, resulting in a total capacity of approximately 1200 riders per hour. The roller coaster's track layout utilizes the terrain and interacts with both the Kings Island & Miami Valley Railroad and White Water Canyon attractions during its roughly two-minute ride cycle.

The ride begins with the train leaving the station, upon which it makes an S-turn to the right, crossing over the railroad, then to the left, before climbing the lift hill. Upon latching on to the lift hill chain, a pre-recorded voice chastises the riders saying, "Hey! Hey! I see you up there! What on Earth do you think you're doing? This is security. Seriously, guys, you need to take that truck, go home to your video games. This place is not safe." Cresting the 109 foot lift hill, the chain slows again so that another pre-recorded voice can tell the riders over loudspeakers, "Whatever you do, don't go in the shed!" At the top, the train makes a swooping 98 foot drop to the left, before rising over another hill. At the crest of this second hill, the train makes another left turn and crosses over the lift hill, before diving close to the ground and traveling over a series of airtime hills. The track briefly enters a covered tunnel as it makes a left-hand turn to change directions and return towards the station. The return track runs mostly parallel to the outbound track until near the second drop, where it veers away to hit a brake run, coming to a stop outside the entrance to the shed.

Upon stopping on the brake run, a pre-recorded audio segment is heard. A security guard is heard saying, "Don't go in the shed. This is a restricted area." The audio loops several times and begins to glitch and skip, eventually changing to, "Go in the shed." The train proceeds slowly into the shed, which is only dimly-illuminated by flickering overhead lamps and fluorescent lights. After passing through the storage tracks, the train comes to a stop approximately where the shed crosses over the railroad once again. In this room, an assortment of saws, vines, leaves, a Coca-Cola vending machine, and other items left behind by workers are visible. A cassette player starts playing music from the 1980s until a loud screeching sound is heard. Projection screens show one of three random creatures, followed by a 90° turn to the right as the train re-enters the station.

In 2017, Mystic Timbers was awarded "Best New Ride" by Amusement Today in their annual Golden Ticket Awards publication. Overall, it was ranked eleventh among all wooden roller coasters.

All content from Kiddle encyclopedia articles (including the article images and facts) can be freely used under Attribution-ShareAlike license, unless stated otherwise. Cite this article:
Mystic Timbers Facts for Kids. Kiddle Encyclopedia.