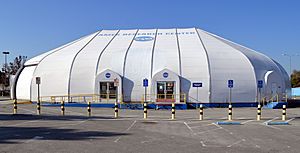 The NASA Gift Shop in Silicon Valley (also called the NASA Ames Visitor Center) is a visitor center at the entrance of NASA's Ames Research Center in Moffett Field, California. The center has the following exhibits:

The gift shop sells space and NASA-related memorabilia. The hours are Monday to Friday, 10 AM to 6 PM, and 10 AM to 5 PM on weekends. It is closed for Federal Holidays.

All content from Kiddle encyclopedia articles (including the article images and facts) can be freely used under Attribution-ShareAlike license, unless stated otherwise. Cite this article:
NASA Gift Shop in Silicon Valley Facts for Kids. Kiddle Encyclopedia.