A Nargun, according to Gunai/Kurnai tribal legends, a fierce half-human half-stone creature that lived in the Den of Nargun, a cave under a rock overhang behind a small waterfall located in the Mitchell River National Park, Victoria, Australia. Aboriginal legend describes the Nargun as a beast entirely made of stone except for its hands, arms and breast. The fierce creature would drag unwary travellers into its den. Any weapon directed against it would be turned back on its owner.

The Den of Nargun 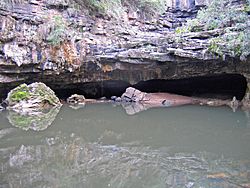 The Den of Nargun 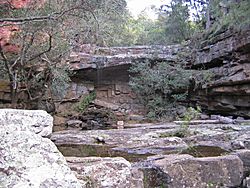 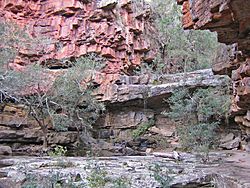 The cave is found on Woolshed Creek, a small tributary of the Mitchell River in the Mitchell River National Park, about one kilometre upstream from where the creek joins the river. The existence of the cave was first recorded by Alfred Howitt. After heavy rainfall, the opening of the cave may be hidden by a waterfall, which has excavated a pool at its base. The den was once rimmed with stalactites, but unfortunately these have been broken off as souvenirs by visitors over the years. Smaller stalactites may still exist inside the cave.

The area is a site of Aboriginal historical importance, and is located on the Batuluk Aboriginal Cultural Trail. Stories were told around aboriginal campfires about how the Nargun would abduct children who visited the rockpool. It was said the Nargun could not be harmed with boomerangs or spears, as they would be reflected back to the thrower. These stories served the dual purpose of a cautionary tale to keep children close to the campsite, and away from the sacred cave. The Den of Nargun was considered a special place for women of the Gunai tribe, and in reality was used for women's initiation and learning ceremonies rather than being the lair of any predator.

A similar, though less well known site, called Deadcock Den is situated on Woolshed Creek downstream from the Den of Nargun, only about 200m from where it joins the Mitchell River. This site was also of great cultural significance to the Gunai people, women in particular.

All content from Kiddle encyclopedia articles (including the article images and facts) can be freely used under Attribution-ShareAlike license, unless stated otherwise. Cite this article:
Nargun Facts for Kids. Kiddle Encyclopedia.