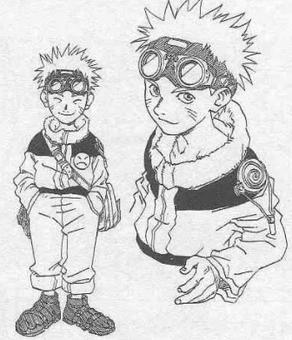 Naruto Uzumaki in his regular orange jumpsuit doing a handsign.

Naruto Uzumaki (うずまきナルト, Uzumaki Naruto) is a fictional character in the anime and manga franchise Naruto created by Masashi Kishimoto. Naruto is the main protagonist and titular character of the series. Although for two seasons, he is only a Genin of Konohagakure, he is trained as a sage and thus is one of the village's most powerful ninja. He is the only son of Minato Namikaze and Kushina Uzumaki, a member former member of the Genin team, Team 7 led by Kakashi Hatake, and is the current jinchūriki of the Nine-Tailed Demon Fox.

All content from Kiddle encyclopedia articles (including the article images and facts) can be freely used under Attribution-ShareAlike license, unless stated otherwise. Cite this article:
Naruto Uzumaki Facts for Kids. Kiddle Encyclopedia.