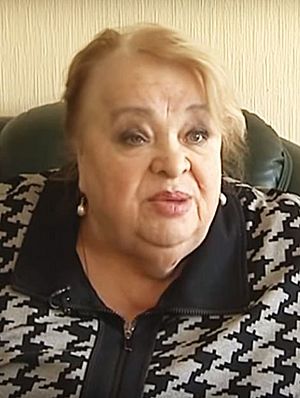 Natalia Leonidovna Krachkovskaya (Russian: Ната́лья Леони́довна Крачковская, maiden name - Belogortseva, 24 November 1938 – 3 March 2016) was a Soviet and Russian actress. She was awarded the Meritorious Artist in 1998. She was born in Moscow. She became famous during the 1970s with roles in the movies The Twelve Chairs and Ivan Vasilievich: Back to the Future.

Krachkovskaya died on 3 March 2016 in a hospital in Moscow from a heart attack. She was aged 77.

All content from Kiddle encyclopedia articles (including the article images and facts) can be freely used under Attribution-ShareAlike license, unless stated otherwise. Cite this article:
Natalia Krachkovskaya Facts for Kids. Kiddle Encyclopedia.