Nauticus is a maritime-themed science center and museum located on the downtown waterfront in Norfolk, Virginia, also known as the National Maritime Center.

Construction began at the former site of Norfolk's Banana Pier on the downtown Norfolk waterfront in February 1992, and Nauticus opened to the public in June 1994. Other visitor attractions close by include the Virginia Zoo, Norfolk Scope, and Harbor Park, home to the Norfolk Tides.

Half Moone Cruise and Celebration Center 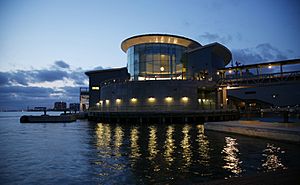 Half Moone Cruise and Celebration Center

The City of Norfolk opened the Half Moone Cruise and Celebration Center—located at Nauticus on April 7, 2007.

The 80,000-square-foot (7,400 m2), passenger-friendly facility features views of the Elizabeth River; an enclosed, elevated passenger gangway; a retractable bridge leading into a 16-slip marina; a terrazzo floor tile in the entrance; a separate lounge and check-in area for cruise line VIP passengers; a security-focused Customs and Border Protection area and an embarkation stations. Its first passenger ship, RCI's Empress of the Seas, arrived on April 28, 2007.

The Half Moone also serves as an event venue with approximately 23,000 square feet (2,100 m2) of event spaces, each of which include interpretation and exhibits. Among the areas available for special event rental are the Bermuda Room, which displays artifacts and objects that tell the historic connections between Virginia and Bermuda; the Half Moone Vista, which includes some facts about the original fort; and the Lido and Promenade Decks, which address functions of those traditional decks on board cruise ships.

The name—Half Moone—is taken from the name of the fort that was built on the same site in 1673 in the form of a "half moone." The fort was built to protect Norfolk's burgeoning maritime industry. 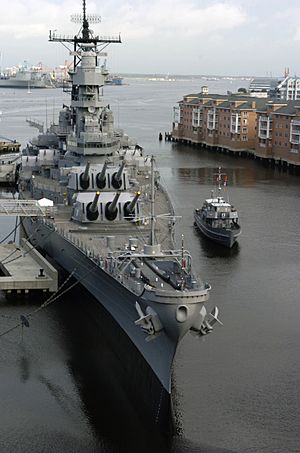 One of the largest battleships ever built arrived at Nauticus on the downtown Norfolk waterfront on December 7, 2000. That date was significant because it marked the 57th anniversary of USS Wisconsin's launching in 1943 – two years to the day after the attack on Pearl Harbor.

USS Wisconsin opened for main deck tours on April 16, 2001. That date marked the 57th anniversary of the ship's commissioning in 1944.

Wisconsin, one of four Iowa-class battleships constructed by the United States Navy, was built from 1941 to 1943 at the Philadelphia Navy Yard and commissioned in 1944. She played a major role in World War II, earning five battle stars for service against Japanese forces. She served during the Korean War, and led the Navy’s surface attack on Iraq during the Persian Gulf War in 1991, firing not only her first but also the campaign's first Tomahawk missile. The ship was decommissioned at Philadelphia and retired to the Naval Inactive Reserve Fleet in Portsmouth, Virginia, in October 1996.

On April 16, 2010, exactly 66 years from the day she was commissioned at Philadelphia Naval Shipyard, the United States Navy ceremoniously transferred ownership of the vessel to the city of Norfolk, Virginia. Vice Admiral David Architzel joined Mayor Paul Fraim, other city and military leaders, and former crew members on deck to conduct the ceremony. Vice Admiral Architzel presented the long glass to Norfolk Mayor Paul Fraim signifying that the Mayor now has the watch.

By the end of November 2009, more than 2,495,296 visitors have walked the teak decks of Wisconsin. These visitors have come from all fifty U.S. states and from many other nations to experience the battleship. 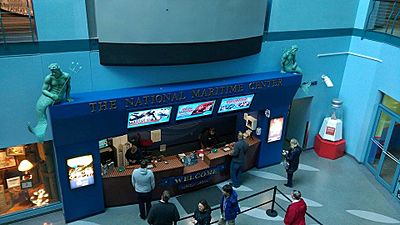 Sail Nauticus is a 501(c)3 nonprofit organization created by the Nauticus Foundation in 2013. Sail Nauticus is a community sailing center, with both adult and youth programs. Its cornerstone program is the Sail Nauticus Academy, an after-school program in partnership with Norfolk Public Schools that teaches middle school students sailing and maritime sciences from a STEM perspective.

The second floor of Nauticus houses the Hampton Roads Naval Museum and the entrance to the battleship Wisconsin. On the third floor of Nauticus, guests can view a variety of science and maritime exhibits, including: aquaria, a horseshoe crab touch tank, shark lab, Science On a Sphere, NOAA exhibits, interactive theaters, and a weather station. The shark lab of Nauticus is home to four sharks of three different species. There is one male epaulette shark, two male whitespotted bamboo sharks, and one female brownbanded bamboo shark. In the Fall of 2016, there was also a male brownbanded bamboo shark, but it was relocated to a closed tank near the entrance due to aggressiveness.

All content from Kiddle encyclopedia articles (including the article images and facts) can be freely used under Attribution-ShareAlike license, unless stated otherwise. Cite this article:
Nauticus Facts for Kids. Kiddle Encyclopedia.