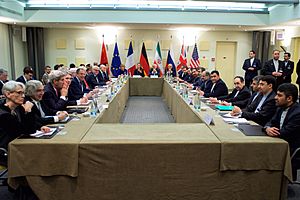 The ministers of foreign affairs of the United States, the United Kingdom, Russia, Germany, France, China, the European Union and Iran negotiating in Lausanne for a Comprehensive agreement on the Iranian nuclear programme (30 March 2015).

A negotiation is a formal discussion to reach agreement about an issue. It is an important method to reduce conflict, and to get things done. Examples:

All content from Kiddle encyclopedia articles (including the article images and facts) can be freely used under Attribution-ShareAlike license, unless stated otherwise. Cite this article:
Negotiation Facts for Kids. Kiddle Encyclopedia.