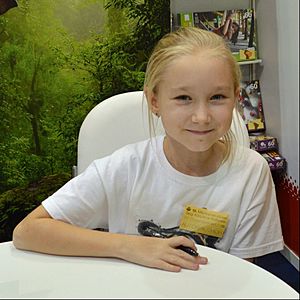 Nela The Little Reporter at the author's meeting

Her nickname ("Nela The Little Reporter") is associated with the series of children's books she has created, in which she takes on the main role. Nela has been traveling around the world since the age of five. According to the publisher, Nela travels with her parents who document the trips and then produce programs in which she stars. Her travel series was presented at the International Festival of Educational Production for Children in Japan - Japan Prize. Nela is also the author of books that are created with editorial help from her parents. The first book "Nela`s 10 amazing adventures" (pol. "10 niesamowitych przygód Neli") was published in 2014 when Nela was 8 years old. From that year on, Nela has appeared in a television program broadcast by the Polish Public Television TVP 1, and then in TVP ABC. From 2019, her reportages can also be seen on TVP POLONIA around the world. From 2020, Nela's books are published by Willson Media, which is also responsible for the preparation and post-production of her film reports.

As a teenager, Nela actively participates in social and humanitarian activities. In 2019, she was the informal ambassador of the interactive stand of the Ministry of Foreign Affairs (Poland) and the European Commission, created for children and youth in the Humanitarian Town at the International Humanitarian Fair. Participating in the event, among others, was Deputy Secretary-General of the United Nations for Humanitarian Aid Marc Lowcock. During the fair, Nela was visited by Polish President Andrzej Duda.

Currently, Nela is developing an educational and research project as part of "The Adventure starts Here Foundation" she is creating. The foundation will build research bases around the world where scientists and children wanting to become nature observers will be invited. The first research base is to be built in a jungle in Costa Rica.

In 2015 - for the book "Nela and Mysteries of the World" (pol. "Nela i tajemnice świata"). She was also the first person to receive this award at such a young age. In 2016 - in the category "Literature for children" for the book "In the Footsteps of Nela through the Jungle, Seas and Oceans" (pol. "Śladami Neli przez dżungle, morza i oceany").

In 2017- Nela received 3 out of 5 nominations for her books: "Nela and Polar Animals" (pol. "Nela i polarne zwierzęta"), "Nela and the Treasures of the Caribbean" (pol. "Nela i skarby Karaibów") (won Empik Bestseller for 2017) and "Nela and The Secrets of the Oceans" (pol. "Nela i tajemnice oceanów").

Along with Empik Bestseller Awards, she was also nominated for other awards for her books during these years. In 2017 she received the TRAVELER by National Geographic (Poland) award for her whole series of children’s travel books.

In 2016, The Ministry of National Education (Poland) has included her book "Nela on the Arctic Circle" (pol. "Nela na kole podbiegunowym") in the reading curriculum for Polish schools as supplementary reading in the eighth grade of primary school.

For the time being, Nela`s books are available only in the Polish language.

All content from Kiddle encyclopedia articles (including the article images and facts) can be freely used under Attribution-ShareAlike license, unless stated otherwise. Cite this article:
Nela The Little Reporter Facts for Kids. Kiddle Encyclopedia.