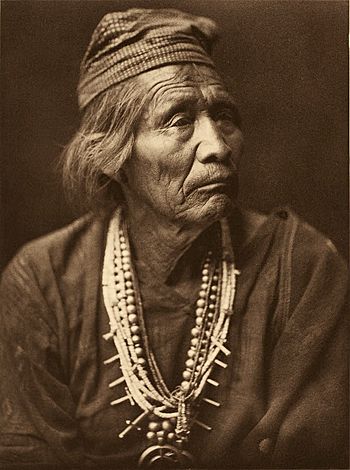 Nesjaja Hatali was a Navajo leader.

Hatali was a medicine man in the Navajo tribe, but soon resisted US expansion into the southwest, alongside Manuelito. Alongside several other war chiefs such as Nova and Geronimo, he was able to use guerrilla tactics to defeat American columns of troops and harass supply lines until the Navajo nation surrendered in 1866. But in the wartime, he was a very successful war leader despite being more knowledgeable in the arts of medicine.

All content from Kiddle encyclopedia articles (including the article images and facts) can be freely used under Attribution-ShareAlike license, unless stated otherwise. Cite this article:
Nesjaja Hatali Facts for Kids. Kiddle Encyclopedia.