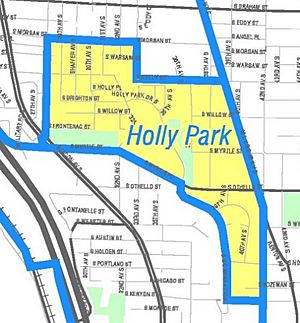 NewHolly (formerly Holly Park) is a neighborhood in southeast Seattle, Washington, United States. It is part of Seattle's South End.

Holly Park was built in the 1940s to house defense workers and veterans, but in the 1950s, it was converted into public housing under the aegis of the Seattle Housing Authority (SHA). As the mid-century style of low-income housing projects fell out of fashion, and with its housing stock not faring well over the decades, SHA decided in 1995 to rebuild Holly Park as a mixed-income neighborhood. The resulting neighborhood is now officially NewHolly, described by the SHA as "the first new neighborhood in Seattle in 50 years."

All content from Kiddle encyclopedia articles (including the article images and facts) can be freely used under Attribution-ShareAlike license, unless stated otherwise. Cite this article:
NewHolly, Seattle Facts for Kids. Kiddle Encyclopedia.