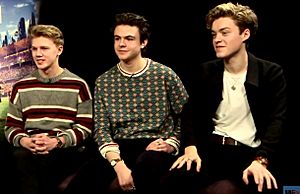 New Hope Club was influenced by The Beatles and Oasis.

The album Welcome To The Club Pt. 2 released in October 2018 reached first place in iTunes in 10 countries. The song "Let Me Down Slow", released in January 2020, also received attention. The 2017 debut EP "Welcome to the Club" made them popular.

All content from Kiddle encyclopedia articles (including the article images and facts) can be freely used under Attribution-ShareAlike license, unless stated otherwise. Cite this article:
New Hope Club Facts for Kids. Kiddle Encyclopedia.