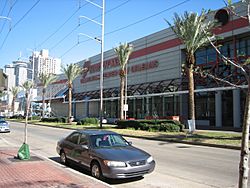 The Ernest N. Morial Convention Center is in New Orleans, Louisiana, United States. The lower end of building one is located 1,640 feet (500 m) upriver from Canal Street on the banks of the Mississippi River. It is named after former Mayor of New Orleans Ernest Nathan Morial.

The center was planned starting in 1978. It is the 5th-largest facility of its kind in the United States, and as of early 2005 was the second-busiest. The first portion of the building was constructed as part of the 1984 Louisiana World Exposition; a series of additions in subsequent decades expanded the center further upriver. The complex was named in honor of Ernest N. Morial, the city's first African American mayor, in 1992. In 2008, the Center was renamed the New Orleans Morial Convention Center in order to emphasize its New Orleans location.

The New Orleans Morial Convention Center, and in the background, the Crescent City Connection bridge over the Mississippi River.

From August 26 through 27, 2005, Wheel of Fortune came to tape three weeks of shows at the convention center. But as Hurricane Katrina threatened the area, they canceled the last week in order to evacuate. In the aftermath of Katrina, the Convention Center was the second most important shelter for survivors, after the Louisiana Superdome. After serving as a temporary medical clinic for some time, the structure again began welcoming conventions in early 2006, including that of the American Library Association.

After Hurricane Katrina passed through the city in 2005, thousands of evacuees were directed to the Convention Center as an unofficial evacuation center. In the confusion following the disaster, people escaping from flooded neighborhoods were directed to the Convention Center by police and word of mouth, with the expectation that there would be provisions, aid, and evacuation buses there. However no such resources were there for several days.

Thousands gathered at the complex in difficult conditions with no power, no water, no food, no medical supplies, no proper sanitation, and no public order, only minimal occasional law enforcement presence within the center, resulting in incidents of crime and gang violence. There were reports of multiple deaths at the center, from causes including violence, dehydration, and lack of medication for the ill.

The poor conditions and lack of prompt government response at the convention center were revealed to the nation on several TV news networks including CNN and Fox. Secretary of Homeland Security Michael Chertoff falsely claimed to be unaware of any problem with conditions even after the networks had been broadcasting images and live reports from the Convention Center. The Morial Convention Center was declared evacuated on September 4.

The Convention Center finished a complete renovation of the facility in November 2006. A previously scheduled expansion project, which would add 524,000 square feet (48,700 m2) of exhibition space in a new building, has been temporarily delayed. The 2006 renovations included the creation of the 4,032-seat New Orleans Theater, a concert hall used primarily for concerts, Broadway stage shows, and other special events.

All content from Kiddle encyclopedia articles (including the article images and facts) can be freely used under Attribution-ShareAlike license, unless stated otherwise. Cite this article:
New Orleans Morial Convention Center Facts for Kids. Kiddle Encyclopedia.