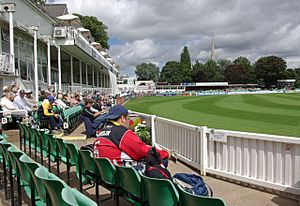 New Road is a cricket ground in the English city of Worcester. It has been the home ground of Worcestershire County Cricket Club since 1896. Since October 2017 the ground has been known for sponsorship purposes as Blackfinch New Road following a five-year sponsorship arrangement with Blackfinch Investments.

The ground is situated in central Worcester, on the west bank of the River Severn, overlooked by Worcester Cathedral on the opposite bank. To the northwest is Cripplegate Park.

Until 1976, the ground was owned by the Dean and Chapter of Worcester Cathedral. The capacity of the ground is 4,500, small by first-class standards.

There is a small cricket shop located just outside the ground, selling cricket equipment, clothing, books and accessories. This shop opened in July 2008, replacing a long-standing older shop inside the ground. The shop also contains the administrative office for ticket sales and enquiries.

The New Road ground is often flooded in winter by the nearby river, and was severely affected by the floods of July 2007, leading to the cancellation of several matches, and losses that were estimated to take nine years to recoup. This has influenced the naming of the new Worcestershire T20 side, the Worcestershire Rapids.

The Club announced that it is to make changes to the ground at the New Road End in 2012. It is due to be completed in August 2013 and includes a Premier Inn and improves the club's corporate facilities by opening a bar and expanding the capacity of the ground to 5500. David Leatherdale (CEO) also said that the New Road End will undergo significant change with an expansion again in seating. 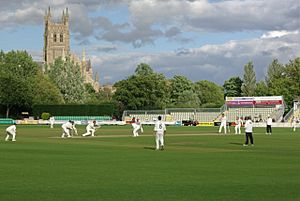 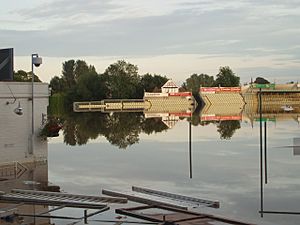 The ground has also seen nine Women's Test matches between 1951 and 2009, including the England Women's decisive victory during the 2005 Ashes, in which Katherine Brunt scored 52 and took match figures of 9/111; Brunt also took a first-innings 6/69 in 2009 Ashes Test at Worcester, which was drawn. It has staged a single Women's ODI in 2000, a match curtailed by rain in which South Africa defeated England on run rate.

The England Lions (formerly England A) played a four-day match against the Australian touring side at New Road in 2009; in a drawn match, Mike Hussey (150) and Marcus North (191 not out) made runs, while Worcestershire's Stephen Moore responded with 120; Brett Lee took 6/76.

In 2013, Worcestershire hosted the touring 'Australians' at New Road and the First-Class game along with merchandise sales brought in a six-figure sum for the club.

Single ODI century has been scored at the venue.

All content from Kiddle encyclopedia articles (including the article images and facts) can be freely used under Attribution-ShareAlike license, unless stated otherwise. Cite this article:
New Road, Worcester Facts for Kids. Kiddle Encyclopedia.