Kids Encyclopedia Facts
Not to be confused with The Nicholas Building (Toledo, Ohio). 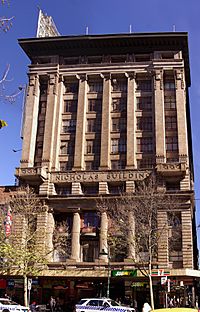 The Nicholas Building is a landmark historic office and retail building located at 37 Swanston St, at the intersection of Swanston Street and Flinders Lane, in the central business district of Melbourne, Australia. Designed by architect Harry Norris and completed in 1926, it is the grandest example in Melbourne of what is known as the 'Chicago School' or 'Commercial Palazzo' style, featuring large scale classical elements. It has long housed a range of small businesses, and is now known for its creative industry tenants such as fashion designers and artists and specialist retailers. It had the longest operating manual lifts in the city, and the ground floor Cathedral Arcade is one of the most notable arcades in the city.

The Nicholas family, headed by Alfred Nicholas, built their fortune on the production of Aspro, a replacement for the German-made aspirin when it became unavailable during World War I. The Nicholas company never occupied the building; it was instead built as a speculative office building development. It was completed in 1926, and designed by architect Harry Norris. Norris established his architecture practice in the building, remaining until his retirement in the mid-fifties. From 1926 to 1967 a Coles department store occupied the basement and part of the ground floor. The building was home to businesses associated with the Flinders Lane garment trade, commercial artists, medical practitioners and architects. By the 2010s the small rooms and relatively cheap rent attracted creative industry practitioners and specialist retailers, some of whom still serve the fashion industry, and it became renowned as one of Melbourne's 'vertical lanes'.

The novel Shantaram, written by one of Australia's most wanted fugitives Gregory David Roberts, was written in the building. In 2003 it is believed a stencil by UK artist Banksy was painted on the building at the corner of Swanston St and Flinders Lane; a piece of plastic was put up over the piece to protect it from the elements but was later painted over by vandals causing a disturbance in the art community.

The Nicholas Building was home to the last manually operated elevator in Melbourne before undergoing modernisation.

It is listed by the National Trust and is also listed by Heritage Victoria. 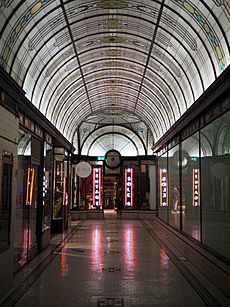 The Nicholas Building was built in a time of imposed height restrictions that lasted from 1916 to 1957 and stated a limit of 132 ft (40.3 m). It consists of 10 floors and is influenced by the Chicago style evident in Melbourne at the time. It has a terracotta faience façade which was designed to self-clean; the grey terracotta manufactured as ‘Granitex’ by Wunderlich was used due to its durability and ease of maintenance. The exterior has a variety of Classical Revival features, such as giant order ionic pilasters to divide the upper façade into bays and Doric columns defining the lower section.

A steel frame structure was used for the first three floors with reinforced concrete on the upper floors. The offices above the first floor was planned around a light well, many now used as studio spaces.

The building is referenced in the song "Elevator Operator" on Australian musician Courtney Barnett's 2015 album Sometimes I Sit and Think, and Sometimes I Just Sit.

All content from Kiddle encyclopedia articles (including the article images and facts) can be freely used under Attribution-ShareAlike license, unless stated otherwise. Cite this article:
Nicholas Building Facts for Kids. Kiddle Encyclopedia.