Nicki Clyne (born February 11, 1983) is a Canadian actress, known for her role as Cally Henderson on the SyFy television series Battlestar Galactica. Clyne is a member of NXIVM, a multi-level marketing company founded by Keith Raniere. Former members, the media, and cult experts have all described NXIVM as a "cult". Clyne is part of the remaining NXIVM members and has continued to defend NXIVM and its practice. Clyne has continued to support NXIVM founder Keith Raniere following his racketeering conviction for acts of ... and ....

Clyne is known for her role as Cally Henderson in the 2003 reimagining of Battlestar Galactica. Like several members of the cast, she was originally cast in a minor, non-recurring role but, having impressed the showrunners, became a major part of the series until her character's death in season four. In 2018, she appeared with fellow Battlestar alumnus Richard Hatch in the web series Personal Space.

She was also featured in two episodes of the podcast Tiki Bar TV, and presented an episode of HypaSpace. She stars alongside Lance Henriksen, Danielle Harris, Bill Moseley, and AFI's Davey Havok in the "illustrated film" series Godkiller. Clyne hosted two seasons of Syfy's Blastr TV, covering science fiction pop culture and events. She appeared in the independent film Lunamancer.

Clyne is a member of NXIVM, a now defunct multi-level marketing large-group awareness training company founded by Keith Raniere and headquartered in Albany, New York. By her own account, she attended her first NXIVM event In November 2005, an "intensive with Executive Success Programs (ESP)," one of several NXIVM companies. It has been reported that Clyne left Battlestar Galactica in 2008 to focus on being a full-time member of NXIVM. Clyne denies the claim.

Prosecutors dismantled NXIVM's corporation structures in 2020 by seizing First Principles Inc., the company with title to NXIVM and Keith Raniere's intellectual property. Nevertheless, Clyne and a small group of NXIVM members continue to proclaim Raniere's innocence and are described in media as NXIVM "die-hards," or "loyalists."

..... The marriage was little discussed until Mack was arrested in 2018. In 2020 Allison Mack filed paperwork in Orange County, California to divorce Clyne.

Fox News, quoting Frank Parlato, Jr. reported that the marriage was an immigration-related sham to keep Clyne (a Canadian citizen) in the United States. The New York Times, citing prosecutors from the United States Attorney for the Eastern District of New York, have said similar.

The Knife of Aristotle and DOS

In 2014, NXIVM adherent Rosa Laura Junco (daughter of Alejandro Junco de la Vega) founded the media organization The Knife of Aristotle, later shortened to The Knife. Clyne was given a job with the organization, and was credited as its "Executive Producer." 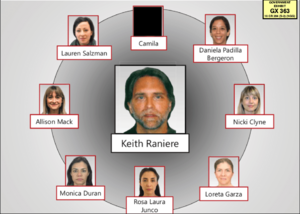 By Clyne's own account, she helped Keith Raniere found a "secret sisterhood" that started in 2015 called "DOS," (also known as "the Sorority," and "the Vow.") The United States Attorney for the Eastern District of New York would allege that DOS was arranged as a pyramidal organization with Raniere at the apex and subordinates Clyne, Mack and others as its "First Line." The First Line were Raniere's direct slaves, instructed to become "masters" by recruiting slaves of their own. The slaves of the First Line (and below) were to treat Raniere as "Grandmaster," but were not allowed at first to know of Raniere's participation.

..... Members were instructed to provide humiliating photos and derogatory information about themselves as "collateral" used to blackmail them into obedience. ..... The group also practiced forms of corporal punishment ("penances") as well as severe caloric restriction and sleep deprivation.

In October 2017 the New York Times ran an expose of Raniere, NXIVM and its relationship to DOS. The article featured Sarah Edmondson who gave her account of the branding ceremony. The following month, the New York Post reported Raniere fled to Mexico. Clyne later accidentally revealed his location on her Instagram, sharing a photo of a Puerto Vallarta landmark revealing his whereabouts to the FBI. In March 2018, Mexican police raided the vacation home where Raniere and DOS members Clyne, Mack, and Lauren Salzman were staying. The Mexican government deported Raniere as persona non grata, and he was arrested by the United States. .....

After Raniere's arrest, a grand jury in the United States District Court for the Eastern District of New York continued investigating Raniere and his associates, including Clyne. In addition to Keith Raniere, prosecutors charged Allison Mack, Clare Bronfman and several others for activities involving either DOS or NXIVM. ..... In the course of the investigation, the government subpoenaed Clyne to testify before the grand jury. She invoked her Fifth Amendment rights against self-incrimination, and was not indicted.

An FBI agent's affidavit supporting asset forfeiture indicates that while Rosa Laura Junco provided funds and owned the LLC that bought the DOS Sorority House, Clyne was Managing Member of the LLC and her passport included in purchase paperwork. After the DOS Sorority House was sold in 2018, proceeds were deposited into a trust account held by Clyne's lawyer, Edward Sapone. After Raniere's conviction, a magistrate judge authorized the seizure of the funds in August 2019.

In a 2020 prosecution memorandum opposing the retrial of Keith Raniere, prosecutors stated their position that "the cache of DOS materials, including collateral, in Clyne’s possession is the product of fraud and extortion, as was demonstrated at trial." Devising restitution for the victims of Raniere, Judge Nicholas Garaufis ordered that as restitution, "all lower-ranking DOS members are statutorily entitled to the return of their collateral." Due to Fifth Amendment concerns, this order is stayed until 60 days after the ruling on Raniere's appeal to the United States Court of Appeals for the Second Circuit, which as of July 2022[update] remains unresolved.

Following Raniere's conviction, Clyne and other NXIVM members launched an activist group We Are As You and accompanying website WeAreTheForgottenOnes.org. The members of the organization danced outside of Metropolitan Detention Center, Brooklyn, where Raniere was detained, ostensibly to cheer up prisoners who were unable to have visitors due to the COVID-19 pandemic. The movement faced backlash from former NXIVM members for using the #BlackLivesMatter hashtag on its social media posts and questioning why the movement only targeted the prison where Raniere is located, and how it could serve as a possible attempt to recruit new members.

Since Raniere was relocated out of Brooklyn to United States Penitentiary, Tucson, the group's website has been abandoned and cybersquatted; its last Internet Archive snapshot was November 2020.

In August 2020, the government filed exhibits ahead of Raniere's sentencing indicating that he sent messages to Clyne through the Federal Bureau of Prisons-monitored TRULINCS email system, the contents of which include messages condemning government witnesses for having "broken vows," and calling them "apostate sorority sisters."

In September 2020, one month before Raniere was sentenced to 120 years in prison, Clyne spoke out in his defence in an interview with CBS News This Morning. Footage of Clyne was used in season one of the HBO documentary series The Vow. In the show's second season, she is interviewed on camera, continuing to defend Raniere despite others, particularly Sarah Edmondson, expressing regret for having enticed her into NXIVM.

Clyne, Allison Mack, and other NXIVM associates were named as defendants in a civil lawsuit filed in federal court by 80 former NXIVM members in January 2020. The lawsuit charging the NXIVM organization of being a pyramid scheme, exploitation of its recruits and conducting illegal human experiments and making it "physically and psychologically difficult, and in some cases impossible, to leave the coercive community." Clyne is defending herself pro se and in a statement says, "I do not have any assets that would grant any relief or compensation for the Plaintiffs’ alleged hardships… I have a 2011 Subaru to my name."

All content from Kiddle encyclopedia articles (including the article images and facts) can be freely used under Attribution-ShareAlike license, unless stated otherwise. Cite this article:
Nicki Clyne Facts for Kids. Kiddle Encyclopedia.