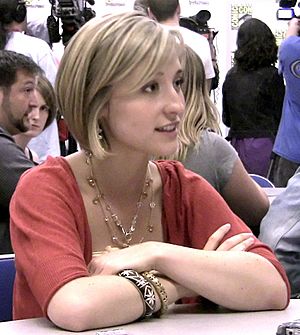 Mack was born in Preetz, West Germany to American parents.

Mack was arrested by the FBI in Brooklyn on April 20, 2018, on charges of trafficking, trafficking conspiracy and forced labor conspiracy. She faces 15 years-to-life in prison.

All content from Kiddle encyclopedia articles (including the article images and facts) can be freely used under Attribution-ShareAlike license, unless stated otherwise. Cite this article:
Allison Mack Facts for Kids. Kiddle Encyclopedia.