Kids Encyclopedia Facts
For the later luthier (1662-1752) with no connection to the Amati family, see Dom Nicolò Amati.

Nicola Amati, Nicolò Amati or Nicolao Amati ( 3 December 1596 – 12 April 1684) was an Italian Master Luthier from Cremona, Italy. Amati is one of the most well known luthier from the Casa Amati (House of Amati). Nicola was the teacher of illustrious Cremonese School luthiers such as Andrea Guarneri and Giovanni Battista Rogeri. While no clear documentation exists for being apprentices in his shop, Amati may have also apprenticed Antonio Stradivari, Francesco Rugeri, and Jacob Stainer as their work is heavily influenced by Amati.

Nicola Amati was the fifth son of Girolamo Amati (Hieronymus I, b. 1561; d.1630) from his second wife, and the grandson of Andrea Amati. He was one of 12 children of Girolamo. Amati's mother, Laura de Lazzarini, also known as Laura de Medici de Lazzarini, was the daughter of Giovanni Francesco Guazzoni. They were distantly related to the Florentine Medici family.

Nicola probably apprenticed with his father and uncle. By the 1620s, Nicola was the dominant luthier in the Amati workshop.

The 1629–31 Italian plague affected northern and central Italy including Cremona. In 1630, the plague killed Amati's father, mother and two of his sisters. After his parents' death, he lived with his sister until his marriage.

Amati married Lucrezia Pagliari (d. 26 November 1703) on 23 May 1645. His pupil, Andrea Guarneri, was present at the ceremony and signed the register. Nicolo and Lucrezia had four sons and four daughters. Their son Girolamo Amati (Hieronymus II, b. 1649; d. 1740) (known as Girolamo II) was the family's last luthier. 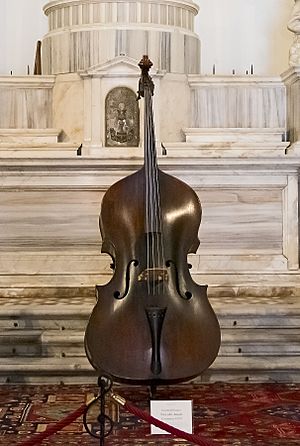 Of all the Amati Family violins, those of Nicola are often considered most suitable for modern playing. As a young man his instruments closely followed the concepts of his father's, with a relatively small model and high arch rising nearly to a ridge in the centre of both the front and back of the instrument.

The Latin forms of the first names, Andreas, Antonius, Hieronymus, and Nicolaus, were generally used on the violin labels, and the family name was sometimes Latinized as Amatus.

Beginning in 1630, he gradually began to show signs of originality, which by 1640 were expressed in what is now known as the "Grand Amati Pattern". This Grand Pattern was slightly larger (the backs being up to 35.6 cm (about 14 inches) long, and most notably, up to 20.9 cm (about 81⁄4 inches) wide, allowed a larger sound. Well curved, long-cornered, and strongly and cleanly purfled (decorated with an ornamental border), these instruments represent perhaps the height of elegance in violin making, and were characterized by mathematically derived outlines and transparent amber-colored varnish. The Grand Amati style was the inspiration for other Cremonese makers such as Vincenzo Rugeri and early violins by Antonio Stradivari.

As a lone survivor of fine luthier after the Italian Plague of 1629–31, the demand for musical instruments began to increase in the 1640s thus creating problems for Amati. He was one of the first to take apprentices from outside his family into his workshop. Andrea Guarneri, who eventually founded the Guarneri Family of violin makers, was Amati's pupil.

Francesco Rugeri may have been a pupil of Nicola Amati, however, like Antonio Stradivari, census records also fail to mention his name in the census of the Amati household. The lack of census records showing the Rugeri name may be explained by the possibility of Francesco not being an indoor apprentice, but one who lived and boarded at his own home while apprenticing. Francesco occasionally inserted his labels in his instruments stating he was a pupil of Nicola Amati. For example, there exists a violin labelled "Francescus Rugerius Alumnus Nicolai Amati fecit Cremonæ 1663". Nicolò Amati was the godfather to Francesco's son, Giacinto, indicating that the two families at least shared a close relationship and close collaboration would seem likely.

Antonio Stradivari may have been a pupil of Nicola, however the only documentary evidence is one Antonio Stradivari label dated 1666, which reads, "Alumnus Nicolais Amati" - student of Nicolò Amati. It has always been controversial whether he was an actual apprentice of Nicola Amati or merely considered himself a student and admirer of his work. There are important discrepancies between their work. Some researchers believe early instruments by Stradivari bear a stronger resemblance to Francesco Rugeri's work than Amati's. Additionally, the utilization of a small dorsal pin or small hole, invariably used not just by Nicolò Amati but all of his confirmed pupils—with the exception of Antonio Stradivari, adds further evidence that Stradivari may have learnt his craft apart from Amati. This pin or hole was fundamental in the graduation of the thickness of the plates and was obviously a technique passed on through generations of pupils of the Amati. This dorsal pin is also not found in any of the instruments of the Rugeri family, suggesting Antonio Stradivari may have actually learnt his craft from Francesco Rugeri, although both being influenced by Amati. W.E. Hill & Sons concede that they fail to find the hand of Stradivari in any of Nicolo Amati's work, although the unmistakable hands of Andrea Guarneri and Francesco Rugeri are evident.

Nicola ceased being actively involved in violin manufacturing by the end of 1670. Increasingly the handwork of his son, Hieronymus II, is seen on Amati instruments. Amati died on 12 April 1684, aged 87.

Amati's instruments are very rare and most of them are on display in museums around the world. Museums with his work on display, include the Metropolitan Museum of Art in New York, Museo del Violino in Cremona and the Royal Academy of Music Museum in London.

However, there are a few performers who have played with Nicola instruments, Thomas Bowes plays a Nicola Amati violin, and Chi-chi Nwanoku (OBE) plays an Amati double-bass.

(From the Cozio Archive)

All content from Kiddle encyclopedia articles (including the article images and facts) can be freely used under Attribution-ShareAlike license, unless stated otherwise. Cite this article:
Nicola Amati Facts for Kids. Kiddle Encyclopedia.