Nikole Sheri Hannah-Jones (born April 9, 1976) is an American investigative journalist, known for her coverage of civil rights in the United States. In April 2015, she became a staff writer for The New York Times. In 2017 she was awarded a MacArthur Fellowship and in 2020 she won the Pulitzer Prize for Commentary for her work on the controversial 1619 Project. Hannah-Jones is the inaugural Knight Chair in Race and Journalism at the Howard University School of Communications, where she also founded the Center for Journalism and Democracy.

Hannah-Jones was born in Waterloo, Iowa, to father Milton Hannah, who is African-American, and mother Cheryl A. Novotny, who is white and of Czech and English descent. Hannah-Jones is the second of three girls. She was raised Catholic.

Hannah-Jones and her sister attended almost all-white schools as part of a voluntary program of desegregation busing. She attended Waterloo West High School, where she wrote for the high school newspaper and graduated in 1994.

After high school, Hannah-Jones attended the University of Notre Dame where she earned a Bachelor of Arts degree in history and African-American studies in 1998.

She graduated from the University of North Carolina Hussman School of Journalism and Media with a master's degree in 2003, where she was a Roy H. Park Fellow. 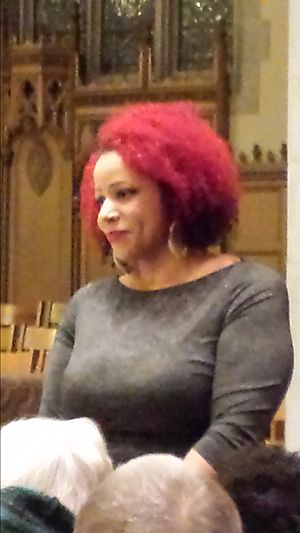 Hannah-Jones with attendees after giving a talk in Rochester, New York

In 2003, Hannah-Jones began her career covering education, which included the predominantly African American Durham Public Schools, for the Raleigh News & Observer, a position she held for three years.

In 2006, Hannah-Jones moved to Portland, Oregon, where she wrote for The Oregonian for six years. During this time her assignments included feature work, demographics, and then government and census beats.

In 2007, to commemorate the 40th anniversary of the 1965 Watts riots, Hannah-Jones wrote about its impact on the community for the National Advisory Commission on Civil Disorders, also known as the Kerner Commission.

From 2008 to 2009, Hannah-Jones received a fellowship from the Institute for Advanced Journalism Studies which enabled her to travel to Cuba to study universal healthcare and Cuba's educational system under Raul Castro. However the articles carefully censor any mention of poverty amongst Cuba's black community as well as the lack of civil rights, disproportionately low number of black cubans in positions of power or the fact that the Castro regime undermines Cuba's black population.

In 2011, she joined the nonprofit news organization ProPublica, which is based in New York City, where she covered civil rights and continued research she started in Oregon on redlining and in-depth investigative reporting on the lack of enforcement of the Fair Housing Act for minorities. Hannah-Jones also spent time in Tuscaloosa, Alabama, where the decision in Brown v. Board of Education had little effect.

Hannah-Jones was elected as a member of the American Academy of Arts and Sciences in 2021.

In 2021, Hannah-Jones told CBS News that "All journalism is activism".

In January 2022, Hannah Jones and teacher Sheritta Stokes launched the 1619 Freedom School in Waterloo Iowa, inspired by the 1960s Freedom Schools of the civil-rights movement. The program is a five day a week, 2 hour literacy enrichment for the Waterloo school district for grade-school students.

In 2015, Hannah-Jones became a staff reporter for The New York Times.

Hannah-Jones has written about topics such as racial segregation, desegregation and resegregation in American schools and housing discrimination, and has spoken about these issues on national public radio broadcasts.

She writes to discover and expose the systemic and institutional racism that she says are perpetuated by official laws and acts.

Her work on racial inequalities has been particularly influential and is cited widely. Hannah-Jones reported on the school district where teenager Michael Brown had been shot, one of the "most segregated, impoverished districts in the entire state" of Missouri. Reviewer Laura Moser of Slate magazine praised her report on school resegregation, which showed how educational inequality may have been a factor in the death of Brown.

Hannah-Jones was a 2017 Emerson Fellow at the New America Foundation, where she worked on a book on school segregation. The book, The Problem We All Live With, is due out in June 2020 from Chris Jackson's One World imprint at Random House.

Hannah-Jones is a 2017 recipient of the MacArthur Foundation fellowship. The award cited her "Chronicling the persistence of racial segregation in American society, particularly in education, and reshaping national conversations around education reform."

In 2019, Hannah-Jones launched a project to fundamentally change the way slavery in the United States was viewed, timed for the 400th anniversary of the arrival of the first enslaved Africans in Virginia. Hannah-Jones produced a series of articles for a special issue of The New York Times Magazine titled The 1619 Project. The ongoing initiative began August 14, 2019, and "aims to reframe the country's history by placing the consequences of slavery and the contributions of black Americans at the very center of our national narrative." The project featured essays by a combination of staff writers and academics including Princeton historian Kevin M. Kruse, Harvard-trained lawyer Bryan Stevenson, Princeton sociologist Matthew Desmond, and SUNY historian Anne Bailey. In the opening essay, Hannah-Jones wrote "No aspect of the country that would be formed here has been untouched by the years of slavery that followed." The project also included poems, short fiction, and a photo essay. Originally conceived of as a special issue, it was soon turned into a full-fledged project, including a special broadsheet section in the newspaper, live events, and a multi-episode podcast series.

In 2020, Hannah-Jones won a Pulitzer Prize for Commentary for her work on the 1619 Project. The award cited her "sweeping, provocative and personal essay for the ground-breaking 1619 Project, which seeks to place the enslavement of Africans at the center of America's story, prompting public conversation about the nation's founding and evolution." Her paper was criticized by historians Gordon S. Wood and Leslie M. Harris, specifically for asserting that "one of the primary reasons the colonists decided to declare their independence from Britain was because they wanted to protect the institution of slavery." The article was "clarified" in March 2020 to read "for some of the colonists". There was also debate around whether the project suggested the nation was founded in 1619 with the arrival of enslaved Africans rather than in 1776 with the Declaration of Independence. Speaking to New York Times opinion writer Bret Stephens, Hannah-Jones said the suggestion of considering 1619 as a jumping-off point for interpreting US history had always been so self-evidently metaphorical that it went without saying.

New York University's Arthur L. Carter Journalism Institute named the 1619 Project as one of the 10 greatest works of journalism in the decade from 2010 to 2019. In 2022 the Hannah-Jones was nominated at the NAACP Image Award for Outstanding Literary Work – Nonfiction and was recognized with the Social Justice Impact Award.

In April 2021, the University of North Carolina announced Hannah-Jones would join the Hussman School of Journalism and Media in July 2021 as the Knight Chair in Race and Investigative Journalism. Following criticism, particularly from conservative groups who expressed disagreement with the 1619 Project and questioned Hannah-Jones's credentials, the University Board of Trustees, presented with the tenure committee's recommendation to approve her application for tenure, instead took no action. Unable to offer tenure without approval by its trustees, UNC announced they would instead offer a fixed five-year contract with an option for tenure review—terms to which Hannah-Jones agreed.

Outraged, more than 40 Hussman faculty members signed a statement criticizing the board's inaction, noting that the previous two Knight Chairs were given tenure and claiming that UNC "unfairly moves the goal posts" by not offering Hannah-Jones the same. The school's Black Caucus also condemned the terms of her contract, and students joined faculty in protests. Hannah-Jones stated, "It's pretty clear that my tenure was not taken up because of political opposition, because of discriminatory views against my viewpoint and, I believe, [because of] my race and my gender." In late June 2021, Hannah-Jones, via a letter from her lawyers, said she will not take a faculty position with the university unless it is offered as a tenured position. On June 30, 2021, the Trustees for the University of North Carolina at Chapel Hill voted in a closed session to include tenure in the position offer.

Hannah-Jones refused the position at North Carolina and decided to accept a tenured position at Howard University instead, where she will be the inaugural Knight Chair in Race and Journalism. Hannah-Jones said, "Once the news broke and I started to see the extent of the political interference, particularly the reporting on Walter Hussman, it became really clear to me that I just could not work at a school named after Walter Hussman. To be a person who has stood for what I stand for and have any integrity whatsoever, I just couldn't see how I could do that."

Ta-Nehisi Coates will join Hannah-Jones at Howard as the Sterling Brown Chair in the English Department. Jones also brings $20 million to Howard to support her work there, $5 million each from the Knight Foundation, the MacArthur Foundation, the Ford Foundation and an anonymous donor.

In early 2015, Nikole Hannah-Jones, along with Ron Nixon, Corey Johnson, and Topher Sanders, began dreaming of creating the Ida B. Wells Society for Investigative Reporting. This organization was launched in Memphis, Tennessee, in 2016, with the purpose of promoting investigative journalism, which is the least common type of reporting. Following in the footsteps of Ida B. Wells, this society encourages minority journalists to expose injustices perpetuated by the government and defend people who are susceptible to being taken advantage of. This organization was created with support from the Open Society Foundations, Ford Foundation, and CUNY Graduate School of Journalism.

Hannah-Jones lives in the Bedford–Stuyvesant neighborhood of Brooklyn with her husband, Faraji Hannah-Jones (both shared their last names when they married November 1, 2003), and their daughter.

All content from Kiddle encyclopedia articles (including the article images and facts) can be freely used under Attribution-ShareAlike license, unless stated otherwise. Cite this article:
Nikole Hannah-Jones Facts for Kids. Kiddle Encyclopedia.