Nix is an unincorporated community in southwestern Lampasas County, Texas, United States. It was once a stop on a stagecoach route. 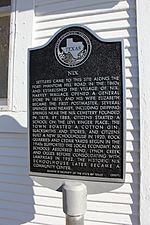 The Fort Phantom Hill Road, a Texas Fort Trail, ran through the Nix in the 1850s.

The community was settled in the early 1880s on the stagecoach and mail route which ran west from Lampasas. In 1883, David Coterell started a blacksmith shop, and Elizabeth Wallace opened a general store. Wallace was the first postmistress when she opened a post office in her store. The post office was discontinued in 1906.

There was considerable interest in drilling for gas and oil in the area during the 1920s and 1930s, though Nix was the site of the county's only dry test well.

By 1947, a combination church/school had been established west of the community.

A Texas historical marker was placed in front of the school in 2007.

All content from Kiddle encyclopedia articles (including the article images and facts) can be freely used under Attribution-ShareAlike license, unless stated otherwise. Cite this article:
Nix, Texas Facts for Kids. Kiddle Encyclopedia.