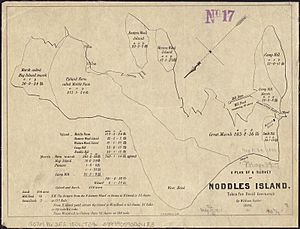 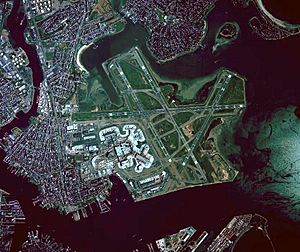 The former Noddle's Island lies immediately to the left (west) of Logan Airport in this image.

For over three hundred years, the island was known as Noddle's Island, for William Noddle, who was probably sent out by John Brereton, and settled upon it in the 1620s, before Boston was established by the Puritans. The island was used for grazing livestock and there was a fortified structure on the island. Mr. Noddle, a resident of Salem, died in 1632 when his canoe overturned on the South River, according to the journal of John Winthrop.

Sometime in the late 1620s or early 1630s, Rev. Samuel Maverick, an Anglican clergyman, became the owner of the island through his wife's inheritance. Maverick was reputed to be New-England's first slaveowner, following a 1638 purchase from a Captain Pierce of the Tortugas. The First Baptist Church of Boston met secretly on the island in the 17th century to avoid persecution by the Puritan state.

During the American Revolutionary War "on this same island was fought the second battle of the Revolution (also known as the Battle of Chelsea Creek), and the first in which the American artillery was used." After the British left Boston harbor, the island was used as a hospital for the French Fleet in 1780 who dubbed it ""L'ile de France'" and buried numerous troops on the island. Following this the island was heavily fortified by the Bostonians with an earthwork known as "Noddle's Island Fort", a rebuilding of a 19-gun British work, later rebuilt and renamed Fort Strong in the War of 1812 after Governor Caleb Strong.

All content from Kiddle encyclopedia articles (including the article images and facts) can be freely used under Attribution-ShareAlike license, unless stated otherwise. Cite this article:
Noddle's Island Facts for Kids. Kiddle Encyclopedia.