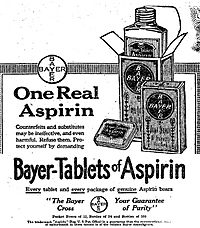 One of the first advertisements for Bayer Aspirin, published in The New York Times in 1917

Non-steroidal anti-inflammatory drugs (often shortened to NSAIDs) are drugs that have analgesic or fever-reducing properties, but that are not based on steroids. Higher doses of such drugs can also be used to fight inflammation. Well-known examples of such drugs are aspirin, diclofenac and ibuprofen.

All content from Kiddle encyclopedia articles (including the article images and facts) can be freely used under Attribution-ShareAlike license, unless stated otherwise. Cite this article:
Non-steroidal anti-inflammatory drug Facts for Kids. Kiddle Encyclopedia.