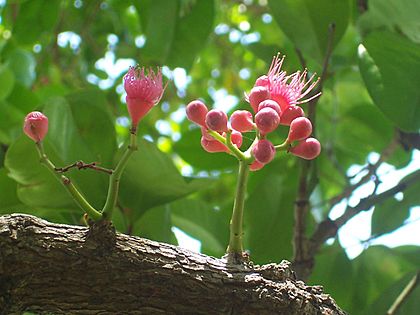 The North Coast Regional Botanic Garden is a 20 hectare garden located at the corner of Coffs and Hardacre Streets, a kilometre from the centre of Coffs Harbour in the Mid North Coast region of New South Wales, Australia.

The gardens are open from 9 am to 5 pm every day of the year. The glasshouse complex is not open on weekends. Entry is free.

A miniature botanic garden covering about 1 hectare showcasing the variety of plantings in the garden.

Covering about half of the total garden area the native forest and mangrove garden represents the original native vegetation of the area.

Located next to the Rare and Endangered area of the garden near the main entrance, the sensory garden contains a variety of aromatic plants.

The Eastern Australian Native Flora contains plants from areas with a similar climate to Coffs Harbour. These are mostly from the north coast heathland, coastal areas of New South Wales and sections of Queensland with a climate similar to Coffs harbour.

The exotic collection contains plants from overseas with a similar climate to Coffs Harbour, mostly from regions approximately 30 degrees north or south of the equator.

The Rainforest area was planted in 1987 and contains about 350 species.

The Japanese friendship garden was constructed with advice from gardeners from the Botanic Gardens in Sasebo, Coffs Harbour's sister city in Japan.

The gardens have tranquil grassy areas and garden beds of plants from many parts of the world. A special feature is the plantings of rare rainforest trees from northern New South Wales. Supervised by the eminent Australian botanist, Alexander Floyd.

All content from Kiddle encyclopedia articles (including the article images and facts) can be freely used under Attribution-ShareAlike license, unless stated otherwise. Cite this article:
North Coast Regional Botanic Garden Facts for Kids. Kiddle Encyclopedia.