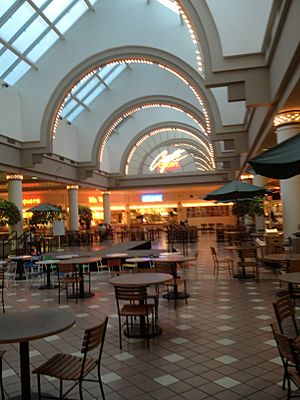 North Dekalb Mall was an enclosed shopping mall located in unincorporated DeKalb County, near Decatur, a suburb of Atlanta, Georgia, United States. Opened in 1965, the center currently comprises more than eighty-five stores on one level. Anchor stores include Burlington Coat Factory and Marshalls, the mall also features a food court and multiplex movie theater. The 2018 Clint Eastwood movie The Mule had scenes shot in the parking lot of the strip mall.

In 1986, North DeKalb Mall was expanded and renovated with two new anchor stores: department store chains Mervyn's and discount chain Lechmere. The mall was renamed Market Square at North DeKalb at this time.

Mervyns shuttered all of its Georgia locations in 1997; the store at North DeKalb was replaced by an Uptons, which closed in 1999, then it became the current Burlington Coat Factory. Stein Mart was added in the early 1990s, replacing a portion of a mall wing which once housed a Spinnaker's restaurant, a Bonanza Steakhouse and smaller mall stores. Old Navy was also added but later closed, becoming Ross Dress for Less. Rhodes Furniture was later Shoder Furniture for a short time before becoming Marshalls in 2010. A furniture store also replaced the old Stein Mart.

Hendon Properties, which bought the mall for $25 million (USD) in 2003, planned on bringing a Costco to the mall.

On May 15, 2014, it was announced that Lennar Commercial Investors LLC, together with Sterling Organization, purchased the mall for an undisclosed amount, with plans to convert the enclosed portion to an open-air concept.

In the spring of early 2016, the Macy's anchor closed. North Dekalb Mall has since become the 'almost' mall of Dekalb County with Costco 'almost' becoming a store anchor for nearly a decade. The mall's primary traffic stems from Emory University employees who use North Dekalb Mall's vast parking lots as a temporary location for ride sharing into the University. This along with limited traffic from the AMC movie theater has helped keep the mall from going completely under.

As of 2019, multiple vacant storefronts in the North DeKalb Mall in Georgia were now renovated so that they could be used for filming. Casual Corner, Software Etc., B. Dalton Bookseller, Musicland and Gadzooks were placed. As of October 2020, North Dekalb Mall had officially closed its doors due to poor sales and the impact of the COVID-19 Pandemic. Marshall’s, Burlington Coat Factory, and AMC Theatres remained open.

All content from Kiddle encyclopedia articles (including the article images and facts) can be freely used under Attribution-ShareAlike license, unless stated otherwise. Cite this article:
North DeKalb Mall Facts for Kids. Kiddle Encyclopedia.