The North Hills Historic District is a residential subdivision in north Knoxville, Tennessee, United States, that was added to the National Register of Historic Places in September 2008 as a historic district. The subdivision was established in 1927 by the North Hills Corporation as a neighborhood of custom-built homes, catering to middle-class families. The historic district includes 130 houses on about 50 acres (20 ha). At the time of its listing on the National Register, it was described by the Tennessee Historical Commission as a good example of mid-20th century residential architecture.

With the advent of the automobile in the 1920s, many middle-class and affluent Knoxvillians began moving from the city's urban neighborhoods to automobile-oriented neighborhoods on the city's periphery. It was during this period that developer George Fieldan and his brothers, Hugh and Carl, founded the North Hills Corporation with the intent of establishing such a neighborhood. In 1927, the Fieldans purchased 43 acres (17 ha) encompassing what is now North Hills Boulevard, Fountain Park Boulevard, and Kenilworth Lane, and began laying off lots. The first house, 1929 North Hills Boulevard, was erected that same year.

In 1928, the North Hills Corporation enacted several measures to ensure North Hills would remain an exclusive neighborhood. These included restrictive covenants that limited the neighborhood to residential use, set a minimum house size of six rooms and minimum home construction cost of US$5,000 (in 1928), specified allowable exterior and roofing materials, mandated design approval by the North Hills Corporation, and banned sales "outside of the Caucasian race." As an automobile-oriented neighborhood, North Hills was too far (almost two miles) from the nearest streetcar line to be attractive for people who depended on public transportation.

By 1933, seventy-five houses had been built in North Hills, and 175 lots remained available. Along with the Fieldans themselves, early residents included doctors, attorneys, University of Tennessee professors, executives of local companies, and Southern Railway employees. The establishment of the Tennessee Valley Authority in 1933 helped the neighborhood continue to develop during the Great Depression, as a number of new lots were sold to TVA employees.

The Fieldan brothers managed the North Hills Corporation into the 1950s, and the North Hills subdivision continued to expand during this period. The neighborhood's mix of architectural styles is typical for the mid-20th century. For the earliest houses in North Hills (i.e., late 1920s), the most common styles were Tudor Revival, Colonial Revival, and Spanish Colonial Revival. During the 1930s, the most commons styles were English Cottage Revival and Minimal Traditional, with the latter remaining common throughout the 1940s. Ranch-style houses were common among new houses built North Hills during the 1950s. 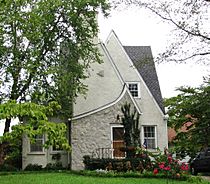 All content from Kiddle encyclopedia articles (including the article images and facts) can be freely used under Attribution-ShareAlike license, unless stated otherwise. Cite this article:
North Hills Historic District (Knoxville) Facts for Kids. Kiddle Encyclopedia.