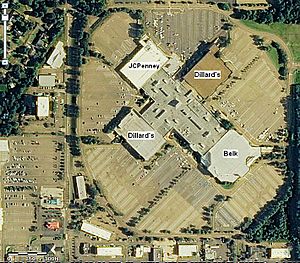 Aerial view of Northpark Mall with anchor tenants in 2014 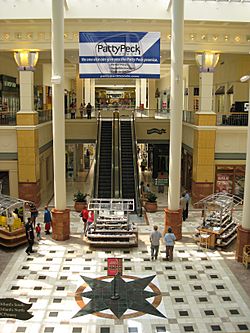 Northpark Mall is a two-level enclosed shopping mall located on County Line Road in Ridgeland, Mississippi, directly across the street from the state capital Jackson. It is managed and co-owned by Pacific Retail Capital Partners. The mall opened in 1984 with four anchors — Jackson-based McRae's, Gayfers, D.H. Holmes, and JCPenney. Northpark also has a cinema located in the back of the mall, originally a 10-screen operation, which later expanded to a 14-screen state-of-the-art setup under Regal Entertainment Group's United Artists Theatres brand but was sold in September 2018 and officially closed in early 2019.

The mall was built by Cadillac Fairview, who sold it to Mills Corporation in 2003.

Northpark's initial success took most of the remaining business from the struggling Jackson Mall, south of the Madison-Hinds county line, which had opened in 1969 with three anchors. JCPenney and Gayfers were two, both relocating to Northpark in 1985, while Woolco closed prior to Northpark's opening. Jackson Mall has since been redeveloped as a medical mall, providing health care for the inner city urban poor.

Northpark Mall's former direct competition was Metrocenter Mall, which was built in southwest Jackson in 1978 and closed in 2018, and the Outlets of Mississippi in nearby Pearl just south of the city by the intersection of I-55 & I-20. The Outlets shopping center was completed in 2013. Other competitors include Dogwood Festival Market and Market Street Flowood which are across from each other at Lakeland Drive (MS 25) and East Metro Parkway in Flowood.

In the midst of a volatile local market, a downturn came at Metrocenter in April 1999 when its Gayfers anchor closed due to the Dillard's buyout of Gayfers' parent company, Mercantile Stores. Another blow came in 2004 when Dillard's announced they were closing its Metrocenter location, and consolidating operations to its Northpark properties — anchor spaces at the ends of the mall's north and south wings, acquired via D. H. Holmes and Gayfers.

A third anchor conversion came in March 2006, as all McRae's stores, including the store at Northpark and Metrocenter, were rebranded by Belk. Both the McRae's and Proffitt's chains had been purchased by Belk in late 2005. Belk of Metrocenter Mall was closed in August 2009. This will boost patronage at the Northpark and Dogwood Festival locations.

All content from Kiddle encyclopedia articles (including the article images and facts) can be freely used under Attribution-ShareAlike license, unless stated otherwise. Cite this article:
Northpark Mall (Mississippi) Facts for Kids. Kiddle Encyclopedia.