Norwood was named Holland's Corner at one time from a store opened about 1860 by James Holland. In 1889, Holland became the first postmaster of the town which was renamed Norwood around the same time. The Red Door Country Store, at the corner of Norwood Road and Ednor Road, was a general store owned by Marie E. Smith that had a scale on which farmers weighed their grain. The store also served as a post office after the closure of the post office in nearby Ednor, Maryland. 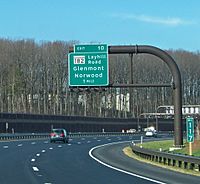 Norwood as a toponym is largely unused and this lack of use gained local prominence due to the use of "Norwood" as one of two "key destinations" listed on signs for the Layhill Road interchange on the ICC (Exit 10).

All content from Kiddle encyclopedia articles (including the article images and facts) can be freely used under Attribution-ShareAlike license, unless stated otherwise. Cite this article:
Norwood, Maryland Facts for Kids. Kiddle Encyclopedia.