Overview of the forms and functions of memory in the sciences
This page is about biological memory. For digital data storage, see Computer memory.

Memory is the personal record of past experiences. It is the brain's ability to store information to use later. It is studied in a special science called "cognitive psychology". There are three main types of memory:

1. Short-term memory, the ability to keep information in mind for a short time, like remembering a phone number long enough to find a piece of paper.

1.1 Sensory memory, in which sensations are first noticed, like smelling a flower.

2. Long-term memory, the ability to remember things long after they happen, like remembering a holiday you had last year.

Memory loss is usually described as forgetfulness or amnesia.

Sensory memory holds sensory information less than one second after an item is perceived. The ability to look at an item and remember what it looked like with just a split second of observation, or memorization, is the example of sensory memory. It is out of cognitive control and is an automatic response. With very short presentations, participants often report that they seem to "see" more than they can actually report. The first experiments exploring this form of sensory memory were precisely conducted by George Sperling (1963) using the "partial report paradigm". Subjects were presented with a grid of 12 letters, arranged into three rows of four. After a brief presentation, subjects were then played either a high, medium or low tone, cuing them which of the rows to report. Based on these partial report experiments, Sperling was able to show that the capacity of sensory memory was approximately 12 items, but that it degraded very quickly (within a few hundred milliseconds). Because this form of memory degrades so quickly, participants would see the display but be unable to report all of the items (12 in the "whole report" procedure) before they decayed. This type of memory cannot be prolonged via rehearsal.

Short-term memory is also known as working memory. Short-term memory allows recall for a period of several seconds to a minute without rehearsal. Its capacity is also very limited: George A. Miller (1956), when working at Bell Laboratories, conducted experiments showing that the store of short-term memory was 7±2 items (the title of his famous paper, "The magical number 7±2"). Modern estimates of the capacity of short-term memory are lower, typically of the order of 4–5 items; however, memory capacity can be increased through a process called chunking. For example, in recalling a ten-digit telephone number, a person could chunk the digits into three groups: first, the area code (such as 123), then a three-digit chunk (456) and lastly a four-digit chunk (7890). This method of remembering telephone numbers is far more effective than attempting to remember a string of 10 digits; this is because we are able to chunk the information into meaningful groups of numbers. This may be reflected in some countries in the tendency to display telephone numbers as several chunks of two to four numbers.

Short-term memory is believed to rely mostly on an acoustic code for storing information, and to a lesser extent a visual code. Conrad (1964) found that test subjects had more difficulty recalling collections of letters that were acoustically similar (e.g. E, P, D). Confusion with recalling acoustically similar letters rather than visually similar letters implies that the letters were encoded acoustically. Conrad's (1964) study, however, deals with the encoding of written text; thus, while memory of written language may rely on acoustic components, generalisations to all forms of memory cannot be made.

The storage in sensory memory and short-term memory generally has a strictly limited capacity and duration, which means that information is not retained indefinitely. By contrast, long-term memory can store much larger quantities of information for potentially unlimited duration (sometimes a whole life span). Its capacity is immeasurable. For example, given a random seven-digit number we may remember it for only a few seconds before forgetting, suggesting it was stored in our short-term memory. On the other hand, we can remember telephone numbers for many years through repetition; this information is said to be stored in long-term memory.

While short-term memory encodes information acoustically, long-term memory encodes it semantically: Baddeley (1966) discovered that, after 20 minutes, test subjects had the most difficulty recalling a collection of words that had similar meanings (e.g. big, large, great, huge) long-term. Another part of long-term memory is episodic memory, "which attempts to capture information such as 'what', 'when' and 'where'". With episodic memory, individuals are able to recall specific events such as birthday parties and weddings.

Short-term memory is supported by transient patterns of neuronal communication, dependent on regions of the frontal lobe (especially dorsolateral prefrontal cortex) and the parietal lobe. Long-term memory, on the other hand, is maintained by more stable and permanent changes in neural connections widely spread throughout the brain. The hippocampus is essential (for learning new information) to the consolidation of information from short-term to long-term memory, although it does not seem to store information itself. It was thought that without the hippocampus new memories were unable to be stored into long-term memory and that there would be a very short attention span, as first gleaned from patient Henry Molaison after what was thought to be the full removal of both his hippocampi. More recent examination of his brain, post-mortem, shows that the hippocampus was more intact than first thought, throwing theories drawn from the initial data into question. The hippocampus may be involved in changing neural connections for a period of three months or more after the initial learning.

Research has suggested that long-term memory storage in humans may be maintained by DNA methylation, and the 'prion' gene.

The multi-store model (also known as Atkinson–Shiffrin memory model) was first described in 1968 by Atkinson and Shiffrin.

The multi-store model has been criticised for being too simplistic. For instance, long-term memory is believed to be actually made up of multiple subcomponents, such as episodic and procedural memory. It also proposes that rehearsal is the only mechanism by which information eventually reaches long-term storage, but evidence shows us capable of remembering things without rehearsal.

The model also shows all the memory stores as being a single unit whereas research into this shows differently. For example, short-term memory can be broken up into different units such as visual information and acoustic information. In a study by Zlonoga and Gerber (1986), patient 'KF' demonstrated certain deviations from the Atkinson–Shiffrin model. Patient KF was brain damaged, displaying difficulties regarding short-term memory. Recognition of sounds such as spoken numbers, letters, words and easily identifiable noises (such as doorbells and cats meowing) were all impacted. Visual short-term memory was unaffected, suggesting a dichotomy between visual and audial memory. 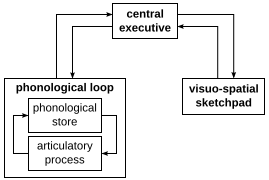 In 1974 Baddeley and Hitch proposed a "working memory model" that replaced the general concept of short-term memory with an active maintenance of information in the short-term storage. In this model, working memory consists of three basic stores: the central executive, the phonological loop and the visuo-spatial sketchpad. In 2000 this model was expanded with the multimodal episodic buffer (Baddeley's model of working memory).

The central executive essentially acts as an attention sensory store. It channels information to the three component processes: the phonological loop, the visuo-spatial sketchpad, and the episodic buffer.

The phonological loop stores auditory information by silently rehearsing sounds or words in a continuous loop: the articulatory process (for example the repetition of a telephone number over and over again). A short list of data is easier to remember.

The visuospatial sketchpad stores visual and spatial information. It is engaged when performing spatial tasks (such as judging distances) or visual ones (such as counting the windows on a house or imagining images).

The working memory model explains many practical observations, such as why it is easier to do two different tasks (one verbal and one visual) than two similar tasks (e.g., two visual), and the aforementioned word-length effect. However, the concept of a central executive as noted here has been criticised as inadequate and vague. Working memory is also the premise for what allows us to do everyday activities involving thought. It is the section of memory where we carry out thought processes and use them to learn and reason about topics.

All content from Kiddle encyclopedia articles (including the article images and facts) can be freely used under Attribution-ShareAlike license, unless stated otherwise. Cite this article:
Memory Facts for Kids. Kiddle Encyclopedia.