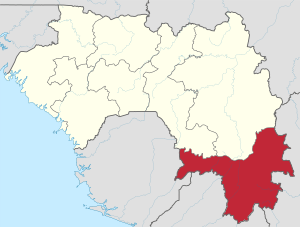 Location of the Nzérékoré Region in Guinea

Nzérékoré is a region in the south of Guinea. It is bordered by the countries of Sierra Leone, Liberia, and Ivory Coast, and the Guinean regions of Kankan and Faranah. The regional capital is the city of Nzérékoré. As of the 2014 census, 1,663,582 people lived there. It has an area of 37.658 km2 (14.540 sq mi).

All content from Kiddle encyclopedia articles (including the article images and facts) can be freely used under Attribution-ShareAlike license, unless stated otherwise. Cite this article:
Nzérékoré Region Facts for Kids. Kiddle Encyclopedia.