An ocarina is a kind of flute that is not made out of a tube. Because the ocarina is in a round or box-like shape, its sound is a little different from other flutes. 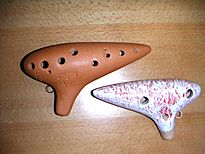 The ten-hole ocarina was first made by Giuseppe Donati, in Italy, in 1853. Instruments like the ocarina had been made for hundreds of years before that in South America, China, and Africa. In Europe, a form called the gemshorn was made in the 16th century. The gemshorn was made from an animal horn.

In the 19th century, groups of ocarina players, with different sized ocarinas, played classical and folk music. Italian ocarinas became known throughout the world, because of this.

In the United States the ocarina was called the sweet potato, because its shape is like a sweet potato.

The English ocarina was first made in the 1960's by John Taylor.

In the 1960s, the English ocarina was invented. It has four finger holes, and may have one or two thumb holes. English ocarinas are made in many shapes.

All content from Kiddle encyclopedia articles (including the article images and facts) can be freely used under Attribution-ShareAlike license, unless stated otherwise. Cite this article:
Ocarina Facts for Kids. Kiddle Encyclopedia.