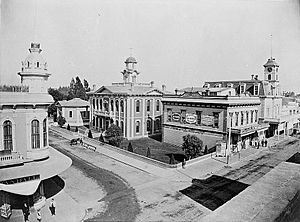 The Octagon Building is an historic redbrick octagonal building in Santa Cruz, California, located at 118 Cooper Street, at the corner of Front Street. It was built in 1882, adjacent to the first (1866) County Court House, to serve as the County Hall of Records. In 1894, a major fire destroyed most of the nearby buildings, including the adjacent courthouse, but the brick Octagon survived.

In 1968, the records were moved to a new County Government Center. Many historic brick buildings on the Pacific Garden Mall were damaged during the 1989 Loma Prieta earthquake, but again the Octagon survived. On March 24, 1971, it was added to the National Register of Historic Places.

Since 1993, the Octagon has been used as the Museum Store for the adjacent Santa Cruz Museum of Art and History (MAH), and later as a coffeehouse. Vacant as of October 2016, the building is administered by the MAH.

All content from Kiddle encyclopedia articles (including the article images and facts) can be freely used under Attribution-ShareAlike license, unless stated otherwise. Cite this article:
Octagon Building (Santa Cruz, California) Facts for Kids. Kiddle Encyclopedia.