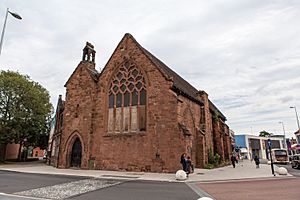 The building as it stands today

The Old Grammar School, Coventry is a Grade I listed building in Coventry, England on the corner of Bishop Street and Hales Street.

The Hospital of St John was built as a hospital-cum-chapel between 1154 and 1179 by Prior Lawrence of the Benedictine Monastery for the Knights Hospitallers, also known as the Knights of Saint John of Jerusalem.

During the Dissolution of the Monasteries around 1544 it was closed down and then sold to John Hales with King Henry VIII setting a condition that Hales started a Free School in Coventry. This he did and a few years later moved the school, named after the king, from the former Carmelite monastery into the hospital.

In 1565, Queen Elizabeth I visited Coventry entering via Bishop Street Gate, and as she passed the school it was mentioned that her father had caused its foundation.

When the street outside of the Old Grammar School was widened in 1794, the half-timbered part of the building was demolished and the street was renamed to Hales Street. That same year, the west end of the church and the bell tower were also demolished.

The King Henry VIII School moved to its present location in Warwick Road in 1885.

All content from Kiddle encyclopedia articles (including the article images and facts) can be freely used under Attribution-ShareAlike license, unless stated otherwise. Cite this article:
Old Grammar School, Coventry Facts for Kids. Kiddle Encyclopedia.