The Old U.S. Post Office and Courthouse is a historic courthouse in Miami, Florida. It is located at 100-118 Northeast 1st Avenue. Constructed over three years (1912–14), it was designed by Kiehnel and Elliott and Oscar Wenderoth. It was added to the U.S. National Register of Historic Places on January 4, 1989. The Miami-Dade County Tax Records say this building was built in 1917 .

In August, 1914, the Miami Weather Bureau Office was relocated from the Bank of Bay Biscayne Building to the third floor of the old federal building. Weather instruments were installed on the roof of the building. Richard Gray (1874-1960) was the Official-in-Charge. It was from this location that the warnings from the Weather Bureau Central Office in Washington were disseminated for the Great Miami Hurricane of 1926 and the Okeechobee Hurricane of 1928. The Miami Weather Bureau Office remained on the third floor from 1914 to 1929, although the weather instruments were moved to the Seybold Building in 1927. 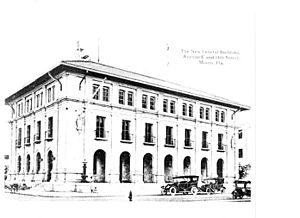 All content from Kiddle encyclopedia articles (including the article images and facts) can be freely used under Attribution-ShareAlike license, unless stated otherwise. Cite this article:
Old United States Post Office and Courthouse (Miami, Florida) Facts for Kids. Kiddle Encyclopedia.