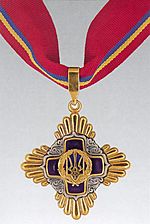 Oleg S. Tymoshenko (Ukrainian: [ɔlɛg tɪmɔʃɛ'nkɔ]; born December 4, 1932; died December 20, 2010), was a Ukrainian choral conductor, professor, artist and academician. Tymoshenko was the honorary President of Green Cross Ukraine. He was a People's Artist of Ukraine, a member of The Lviv National Academy of Arts, and a full Cavalier of the Order of Merit. He was a member of the Ministry of Culture of Ukraine and the Ministry of Education. Tymoshenko was Rector of Petro Tchaikovsky National Music Academy of Ukraine.

Tymoshenko was born on December 4, 1932, in Kreminna, in the Luhansk Oblast (province) of Ukraine.

Starting in 1949, he studied at Lugansk College of Music. He graduated from there in 1953. He then studied at the Kiev Conservatory, graduating in 1960.

From 1960–1963, he worked as Director and teacher at the Nikolai Leontovich Music College in Vinnytsia.

In 1963-2004 he worked at the Kiev Conservatory. His positions there included:

In 1996, he was selected as a founding member of the National Academy of Arts of Ukraine.

All content from Kiddle encyclopedia articles (including the article images and facts) can be freely used under Attribution-ShareAlike license, unless stated otherwise. Cite this article:
Oleg Tymoshenko Facts for Kids. Kiddle Encyclopedia.