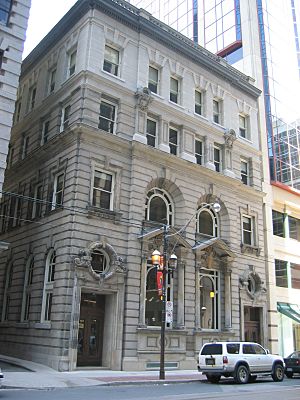 The Ontario Heritage Trust (French: Fiducie du patrimoine ontarien) is a non-profit agency of the Ontario Ministry of Tourism and Culture. It is responsible for protecting, preserving and promoting the built, natural and cultural heritage of Canada's most populous province, Ontario.

The Trust's most recognizable work is the Provincial Plaque Program. Since 1956 (at Port Carling), it has erected over 1,200 of the now-familiar blue and gold plaques, the vast majority of which are found across Ontario, but also in the United States, France, Germany, Ireland, the United Kingdom, and the Netherlands. The Trust also owns a number of historic buildings.

All content from Kiddle encyclopedia articles (including the article images and facts) can be freely used under Attribution-ShareAlike license, unless stated otherwise. Cite this article:
Ontario Heritage Trust Facts for Kids. Kiddle Encyclopedia.