Opotiki (Māori: Ōpōtiki) is a small town in the eastern Bay of Plenty in the North Island of New Zealand. It houses the headquarters of the Opotiki District Council and comes under the Bay of Plenty Regional Council.

(All figures are based on the 2006 census, from Statistics New Zealand)

Ethnicity (of the district)

Iwi based within the district are:

The Opotiki district is bounded on one long side by the eastern half of the Bay of Plenty embayment of the Pacific Ocean and on the other long side by the Raukumara mountain range which rises to 1754 m (5755 ft) at Mt. Hikurangi. The district is predominantly steep hills dissected by fast-flowing rivers, the largest being the Motu. The coastal riverine floodplains (‘flats’) and terraces (‘tablelands’) provide the only flat land. Opotiki township is situated on the largest flat at the conjunction of two of these, the Otara River and the Waioeka River. Sandy beaches, lower hills and larger flats are characteristic of the southwest area of the district; pebbly or rocky beaches and high hills coming right down to the sea are characteristic of the northeast. Current human population is therefore concentrated in the coastal southwest. The district has a land area of 3,104.54 km² (1,198.67 sq mi).

The town of Opotiki is situated exactly on latitude 38° South. The climate is temperate. Summer temperatures reach the mid-20s (Celsius, mid-70s Fahrenheit) on the coast and encourage a continuation of the beach culture of the Bay of Plenty. Winter days are often cloudless, the daytime temperature never drops below freezing but there may be a mild frost at night. Winter snow falls along the crest of the ranges, and on the higher peaks (over 1000 m) may remain for a few weeks. Rain occurs at any season. Severe localised rainstorms ('cloudbursts') may occur in the high country and have caused flash flooding including past inundations of Opotiki township.

Geologically the district is predominantly greywacke of Late Jurassic to Late Cretaceous age, draped by wind-blown loess during the Pleistocene Ice Ages and more recently covered in volcanic ash and pumice from the Rotorua and Taupo volcanic centres. The active volcano Whakaari/White Island lies offshore and represents a tsunami risk. Earthquakes are also a risk, but the district lies just off to the east of major fault lines and the risk is less than in other nearby areas. There are no valuable mineral resources, although the greywacke contains rare decapitated guyots which have been mined in the past for gold and copper.

Natural vegetation is preserved in many parts of the district because of the unsuitability of steep land for cultivation. The district is at a natural geographic and climatic boundary. It is the southern limit for mangroves (Avicennia resinifera) on this side of the North Island of New Zealand, the southern limit for the coastal tree taraire (Beilschmiedia taraire), and the mountains are the furthest north for many New Zealand alpine plants (Ranunculus insignis, Ourisia caespitosa etc.). A remnant sea-level stand of an alpine southern beech (Nothofagus solandri) exists at the head of Ohiwa Harbour, a drowned Ice Ages valley system.

Coastal forest consists of pōhutukawa trees, nikau palms, and many small shrubs belonging to genera such as Pseudopanax, Coprosma etc. Of particular note are a daisy-flowered shrub Olearia pachyphylla endemic to the district, and the rare large-flowered broom Carmichaelia williamsii.

Further inland is temperate rainforest. The canopy is dominated by tall trees such as tawa, puriri and pukatea heavily populated by epiphytes (ferns, lily and orchid families) and lianas which include a pandanaceous climber (kiekie). The understory contains many ferns of various sizes including tree ferns up to 10 m high, the giant stinging nettle Urtica ferox and the extremely poisonous tutu shrub.

In mountainous areas the rainforest gives way to less dense Nothofagus beech forest. The understory is dominated by Gahnia sedges with sparse shrubs such as the foul-smelling Coprosma foetidissima. Above the treeline there is tough-leaved Olearia shrub and alpine herbfield. The diminutive alpine tutu shrub Coriaria pottsiana is endemic to the district.

In the forested areas the birdlife is mainly native species which in addition to the above include wood pigeon (kererū), blue duck (whio), bellbird, morepork (native owl). In the past the rare North Island kōkako (a blue-wattled bird) has been sighted.

Indigenous freshwater fish, apart from eels, are all small species and are caught as ‘whitebait’ in season. Introduced trout are found in some rivers. The district is rich in sea life such as molluscs (pipi, tuatua, kina, scallop), crayfish, edible fish such as snapper, kahawai and gurnard. Commercial aquaculture is beginning (mussel, oyster).

The first known inhabitants of the district were probably members of the Tini o Toi people, who apparently derived from the Tākitimu waka which came to the Whakatane area from Taranaki. There followed, perhaps a few generations later, the Tainui and Te Arawa people, from the first of which the present Ngaitai tribe claim direct descent. Also in this period were migrations by the Nukutere waka from Taranaki, and the Rangimatoru waka.

Several more generations later, the Mataatua people arrived at Whakatane from a place called Parinuitera, which could be either Young Nick's Head or a place on Ahuahu (Great Mercury Island). The present-day Te Whakatōhea and Te Whānau-ā-Apanui iwi claim descent from the intermarriage of Mataatua with earlier migrants. The overland migration called Te Heke o Te Rangihouhiri, which eventually resulted in the Ngaiterangi tribe of Tauranga, also contributed to the population.

One of the earliest Whakatohea ancestors, Tarawa, deliberately concealed his origins and claimed to have swum to the district from across the sea, supported by supernatural fish he called his pets or children (‘pōtiki’). Coming ashore just west of Opotiki, he installed his pets into a spring, which thereby became imbued with his mana. The spring ‘o pōtiki mai tawhiti’ (‘of the children from faraway’) became famous, and the short form of the name later came to be applied to the district as a whole. Opōtiki therefore means (the place) of children. 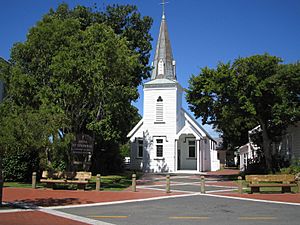 The first contact between local Māori and Europeans was in 1769 when Captain James Cook passed down the Bay of Plenty coast. Early in the nineteenth century a few European and American traders and whalers began to visit.

The 1820s saw numerous well-armed invasions by Ngapuhi war parties from Northland. Although the Opotiki tribes had begun to acquire firearms by that time, they were outgunned and had to retreat from the coast to the rugged forested interior.

The 1830s to 1840s were more peaceful and the tribes again returned to the coast to take advantage of trading opportunities with trading and whaling ships. Māori Christian missionaries began to instruct in literacy and religion. In 1840 the Treaty of Waitangi was taken around to be signed, establishing British sovereignty in name at least. John A Wilson a lay missionary of the Church Missionary Society established the Opotiki mission in 1840. Soon after French missionaries moved into the area. At this period, the village at Opotiki was known as Pā Kowhai. There were other important villages at Tunapāhore and Te Kaha.

The 1850s and early 1860s saw continued development. The Māori tribes took up European agricultural methods and crops, primarily wheat, pigs and peaches, which were traded with Auckland. There were still only a few Westerners living in the district, fewer still of whom were British by birth. Among these foreigners were Dr Albert Agassiz (1840–1910), distant cousin of the famous Swiss/American scientist Louis Agassiz, and Carl Völkner, a German missionary who had gone over to the Anglican Church. 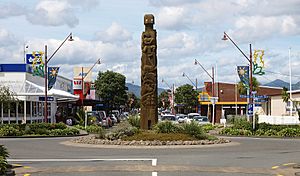 A statue on Main Street commemorating the progress of civilization.

The British invasion of the Waikato resulted in the Whakatohea tribe lending their support to anti-British forces. In 1864 a war party was sent to assist the related Ngaiterangi tribe, who had defeated the British at Gate Pā, but while making their way along the coast the war party was attacked by combined British and Te Arawa forces. The paramount chief of the Whakatohea, Te Aporotanga, was taken prisoner and then executed by the wife of an Arawa chief who had been killed in the battle. While this action was compatible with ancient Māori custom, the fighting had hitherto been conducted according to Christianized rules of engagement, and this was accordingly taken as a sign that the British were no longer to be considered as a civilized enemy.

So in accordance with Māori custom, utu (revenge) was taken by killing the missionary Carl Völkner, who had been recruited as an agent by the British Governor, Sir George Grey, and who had been transmitting secret reports. The so-called "Volkner Incident" resulted in the invasion of Opotiki by British forces in 1865. Within a few years the Opotiki district had been settled by military settlers, and the Maori tribes had been confined to villages with little land attached. A desultory guerilla war followed, led by Whakatohea chief Hira te Popo and Tuhoe chief Eru Tamaikowha, but they eventually surrendered and were given amnesty.

Warfare again erupted in 1870 when the guerilla chief Te Kooti shifted his operations to the area. For a few years he and his followers lived in the rugged Te Wera area in the extreme southwest of the Opotiki district. After an amnesty was granted he eventually moved to Ohiwa Harbour on the coast between Opotiki and Whakatane where he later died.

When peace eventually came to the district, most of the cultivable land had been taken by British settlers and was converted to sheep and cattle (later dairy) farming. By the end of the nineteenth century a generation of both settlers and Māori had grown up together and there was some form of accommodation including intermarriage. The district lost men to the two World Wars, but an even greater blow was the Spanish flu pandemic of 1918-1919 which devastated small villages.

Because of the relatively small area of cultivable hinterland and a treacherous harbour entrance, early hopes of Opotiki town becoming a major centre for the Bay of Plenty were dashed. During the twentieth century the town suffered from repeated shifts of businesses and local government to Whakatane, a situation which has only begun to reverse very recently with increasing population. Major floods in the 1950s and 1960s led to the protection of the town by levees (‘stopbanks’) which have successfully prevented any further inundations. A major boost to prosperity occurred with the kiwifruit boom of the late twentieth century. Mussel farming is the next project for develop the town alongside kiwifruit and bike riding in the Motu trail becoming popular with locals and tourists.

All content from Kiddle encyclopedia articles (including the article images and facts) can be freely used under Attribution-ShareAlike license, unless stated otherwise. Cite this article:
Opotiki Facts for Kids. Kiddle Encyclopedia.