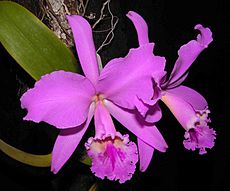 Orchid is a bright rich purple color that resembles the color of some orchids.

Various tones of orchid may range from grayish purple to purplish-pink to strong reddish purple.

The first written use of orchid as a color name in English was in 1915.

In 1987, orchid was included as one of the X11 colors. After the invention of the world wide web in 1991, these became known as the X11 web colors.

Where the name comes from

The name comes from the flowers of some species of the vast orchid family (Orchidaceae), such as Laelia furfuracea and Ascocentrum pusillum, which have petals of this color.

The word Orchid derives from the Greek word orchis which means testicle, after the appearance of the roots of plants of the genus Orchis.

All content from Kiddle encyclopedia articles (including the article images and facts) can be freely used under Attribution-ShareAlike license, unless stated otherwise. Cite this article:
Orchid (color) Facts for Kids. Kiddle Encyclopedia.