The Oregon Jewish Museum and Center for Holocaust Education is the largest museum dedicated to the documented and visual history of the Jews of Oregon, United States. The Museum is dedicated to the preservation, research, and exhibition of art, archival materials, and artifacts of the Jews and Judaism in Oregon.

The museum's archival collection contains records of its various community-based and traveling exhibitions, cultural programs and events, and educational outreach about Jewish identity, culture, and assimilation. 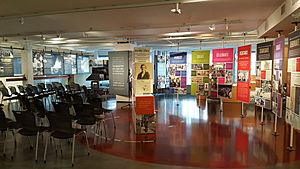 The Museum began in 1989 when a Portland rabbi, Rabbi Joshua Stampfer, invited members of Portland's Jewish community to a meeting at his synagogue to explore the idea of creating the first Jewish museum in the Pacific Northwest.

Some of the exhibits the museum sponsored in their first years include: The Jews of Greece; In the Footsteps of Columbus; The Legacy of Bezalel; Jews, Germany, and Memory, among others. These early exhibits were hosted in a variety of spaces including the Central Library, art galleries, other libraries and synagogues.

In 1996, the Museum merged with the Jewish History Society of Oregon and acquired their archives, comprising major collections of organizational records, family papers, photographs and ephemeral materials dating from 1850 to the present—the largest collection of the documented and visual history of Oregon's Jews. The Oregon Historical Society provided a small office in which to store and process these papers. Today this collection forms the core of the museum archives.

In 2001, the museum moved to a storefront in the Pearl District and opened its first major community-based exhibition, A Call to Serve: Oregon Jews in the Armed Services, which examined the experience of Oregon Jews who served in the United States Military.

In 2009, the current building in Northwest Portland was identified. Within five months, the board raised funds for the architectural makeover of the former commercial film building and the museum opened to the public on December 20, 2009.

In 2014 the Oregon Jewish Museum merged with the Center for Holocaust Education.

In June 2017 the museum changed locations to 724 NW Davis Street and upsized to a 15,000 square foot building.

All content from Kiddle encyclopedia articles (including the article images and facts) can be freely used under Attribution-ShareAlike license, unless stated otherwise. Cite this article:
Oregon Jewish Museum Facts for Kids. Kiddle Encyclopedia.