At the time of its completion, in September 1920, the building was the largest in the city, as measured by floor space, which was approximately 569,000 square feet (52,900 m2) originally. A 229,000-square-foot (21,300 m2) wing was added to the building's northwest corner in 1935–36, changing what had been an L-shaped building to a roughly U-shaped one. The building has nine floors plus a basement. The 4th through 9th floors were used almost exclusively as warehouse space, while most portions of the 2nd and 3rd floors functioned as office and mail-order workspace. The first floor was used primarily for loading and unloading of freight arriving and leaving by truck or rail and temporary storage of such goods. Three rail spurs served the facility, extending into the ground floor. Among other things, the building is known for its large steel-framed roof sign, the largest sign in Portland, which was constructed in 1925. 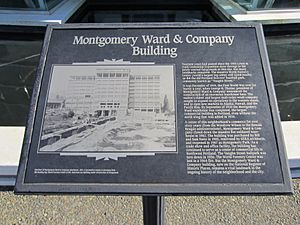 Retail service at this location was relatively limited in its first years. A 1936 expansion added retail space, covering a variety of goods, occupying a new mezzanine floor and parts of the 2nd and 3rd floors. A tire store was opened in an adjacent annex. In the post-World War II years, the Vaughn Street store's business declined steadily. An increasing proportion of the store's customers were attracted to new suburban shopping malls, and in the early 1970s Montgomery Ward began to follow the same path itself, opening stores at Mall 205 and Jantzen Beach Mall, along with a stand-alone store in Beaverton. The Northwest Portland store closed in July 1976, and the building remained in use only for warehouse and mail-order functions and as a "catalog overstock outlet". In 1978, the company built a new warehouse in Portland's Rivergate Industrial District, and in 1982 it closed the Northwest Portland warehouse, eliminating 500 jobs at the site. Only the small "clearance outlet" store continued to operate, and following the 1984 sale of the building, that store closed finally in July 1985.

Only two letters of the large rooftop neon sign had to be altered when the building was renamed from Montgomery Ward to Montgomery Park.

In 1984, the building was acquired by the Norcrest China Company, a Portland property development company owned by Bill Naito and his brother Sam Naito. In 1985, the Naitos initiated a rehabilitation and refitting of the building's interior for use for trade shows, banquets and offices. As part of the renovations, the building was renamed "Montgomery Park". The "notoriously frugal" Bill Naito liked the new name, because it meant that only the "W" and "D" of "Ward" in the huge 14-letter neon rooftop sign needed to be altered, with "P" and "K" letters. The sign was changed in May 1986, at which time most of the renovations also were completed and the building opened for regular use for trade shows, among other uses.

All content from Kiddle encyclopedia articles (including the article images and facts) can be freely used under Attribution-ShareAlike license, unless stated otherwise. Cite this article:
Montgomery Park (Portland, Oregon) Facts for Kids. Kiddle Encyclopedia.