Osborne House is a heritage-listed former residence and now commercial building located at 34 Argyle Place, in the inner city Sydney suburb of Millers Point in the City of Sydney local government area of New South Wales, Australia. The property was added to the New South Wales State Heritage Register on 2 April 1999.

Millers Point is one of the earliest areas of European settlement in Australia, and a focus for maritime activities. Argyle Place, a primitive version of a London Square, was commenced by Governor Macquarie but not fully formed until after quarrying of the adjacent rock face had ceased in about 1865. First tenanted by the NSW Department of Housing in 1982. 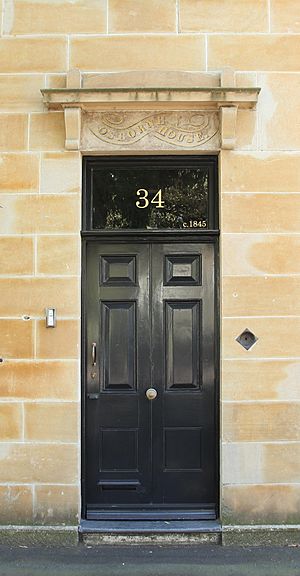 The portico of Osborne House, pictured in 2019.

All content from Kiddle encyclopedia articles (including the article images and facts) can be freely used under Attribution-ShareAlike license, unless stated otherwise. Cite this article:
Osborne House, Millers Point Facts for Kids. Kiddle Encyclopedia.