Out of body experience facts for kids 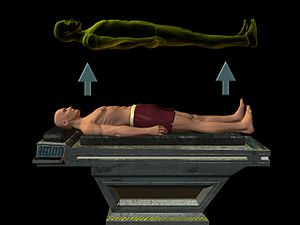 Artist's depiction of the separation stage of an out-of-body experience, which often precedes free movement

An Out of Body Experience (or OBE) is a big feeling of not being where your body is. It hardly ever happens and does not last very long. It feels like you can see and hear and move to different places or even fly, but all the time your body is sleeping in bed. It feels very strange.

OBEs happen most when you are waking up or going to sleep. They can happen if you nearly die too. That kind of OBE is a Near Death Experience, or NDE. Some people get OBEs during too much marathon running or mountain climbing.

Parts of an OBE

OBEs often work the same way. When they do, they are "classical" OBEs.

Some people say they have "phasing" OBEs too. They just stop noticing the world, remember the easy feeling and start seeing. There is no sleep paralysis so they can sometimes talk about it at the same time.

Most people can see two kinds of place when they have an OBE. Robert Monroe called them Locale I and Locale II, but some people call them the etheric plane and the astral plane.

Locale 1 places look like ordinary places in the world. You might see your bedroom or sleeping body in Locale I. Locale II places are more like dream worlds or heavens.

Some people think OBEs are just dreams, but other people say OBEs don't feel like that. Some people think that when you have an OBE, you're like a ghost and the things you see are real. People who think that sometimes call them 'astral projections'. Some scientists like Sam Parnia are doing tests with hidden pictures in hospitals, to see if ill people really can see them when they have NDEs.

All content from Kiddle encyclopedia articles (including the article images and facts) can be freely used under Attribution-ShareAlike license, unless stated otherwise. Cite this article:
Out of body experience Facts for Kids. Kiddle Encyclopedia.