Palace of Caserta facts for kids 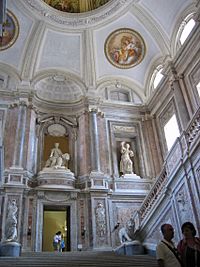 The Gala staircase of the palace. 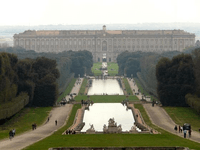 The Palace of Caserta is a palace in Italy. It is just outside Naples. It was built by King Carlo VII of Naples. It was one of the largest buildings built in Italy in the 8th century. It was mainly used as a summer residence of the royal family of the Two Sicilies. In Italian it is known as the Reggia di Caserta. The palace has some 1,200 rooms, including two dozen state apartments, a large theatre modelled after the Teatro San Carlo of Naples. It is often compared to the Palace of Versailles and therefore called the "Italian Versailles".

In 1997, the palace was designated a UNESCO World Heritage Site. The nomination described it as "the swan song of the spectacular art of the Baroque, from which it adopted all the features needed to create the illusions of multidirectional space". The king wanted a magnificent new royal court and administrative center for the Kingdom in a place protected from sea attack.

All content from Kiddle encyclopedia articles (including the article images and facts) can be freely used under Attribution-ShareAlike license, unless stated otherwise. Cite this article:
Palace of Caserta Facts for Kids. Kiddle Encyclopedia.