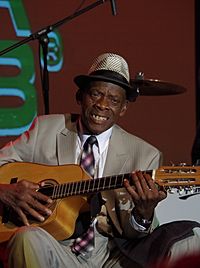 Gilberto "Papi" Oviedo la Portilla (9 February 1938 – 31 October 2017) was a Cuban tres player. He was born in La Habana. He started playing the tres when he was about 15. Oviedo was the tres player in Elio Revé's band for 13 years. He has been on tour with Buena Vista Social Club exposing the son style to wider audiences.

All content from Kiddle encyclopedia articles (including the article images and facts) can be freely used under Attribution-ShareAlike license, unless stated otherwise. Cite this article:
Papi Oviedo Facts for Kids. Kiddle Encyclopedia.