Kids Encyclopedia Facts
Not to be confused with Paramount Hotel (Portland, Oregon). 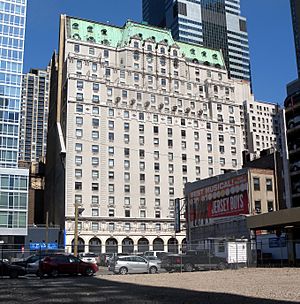 The Hotel Paramount in New York City is a hotel located at 235 West 46th Street, to the west of Broadway. Designed by Thomas W. Lamb, construction was completed in 1928. In 1988, the hotel was closed for an 18-month remodelling project. In 1990, the hotel, under the ownership of Ian Schrager and redesigned by Philippe Starck, reopened as the Paramount Hotel. The hotel underwent a seven-month-long renovation in 1998 at a cost of $7 million, which included enhancements to lobby lighting.

After purchasing the hotel in 1986, Ian Schrager was able to more than double occupancy rates in about two years, to 82%. Schrager sold the hotel in 2004 for $126 million to a Sol Melia Hotels and Resorts / Hard Rock Cafe joint venture. When Hard Rock was sold to the Seminole Tribe of Florida, the Paramount was sold to Walton Street Capital. In 2011, the hotel was sold to Aby Rosen's RFR Holding.

Various musicians have been associated with the Paramount. The Paramount Hotel Grill, a restaurant within the hotel, hosted jazz performances from the 1930s onwards. At the height of their fame in 1931, the Memphis Stompers performed at the Paramount Hotel. Charlie Barnet led a band there from 1932 onwards. From 1938 to 1951, theatrical impresario and songwriter Billy Rose operated "Billy Rose's Diamond Horseshoe" nightclub in the basement of the Paramount. The club was known for its vaudeville-styled reviews and chorus of showgirls, "Billy Rose's Long-stemmed beauties." The Diamond Horseshoe featured some of the top entertainers of the era, and was the inspiration for the 1945 musical film Diamond Horseshoe starring Betty Grable.

Meuller, Andrew - "Rock And Hard Places" 1999 Virgin Books - Chapter 1 "In A Blue Yorke State of Mind," Last paragraph of page 9, and page 10. Author Mueller sits with Radiohead's Thom Yorke for a casual discussion/interview, after a secret show at the lower east side's Mercury Lounge, in the wee hours of the morning of October 3, 1995.

— contains a case study of Schrager's redevelopment of the hotel

All content from Kiddle encyclopedia articles (including the article images and facts) can be freely used under Attribution-ShareAlike license, unless stated otherwise. Cite this article:
Paramount Hotel Facts for Kids. Kiddle Encyclopedia.